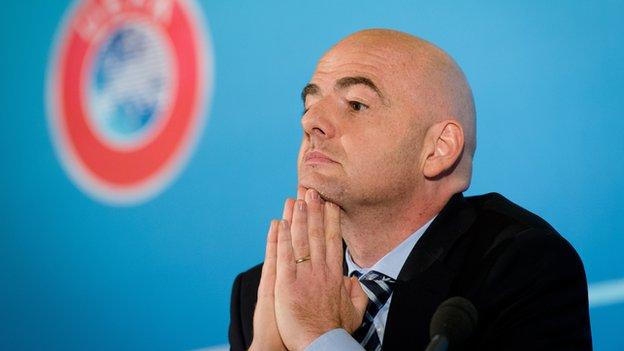 An 11-point plan designed to tackle match fixing will be distributed to all 54 European football associations.

European governing body Uefa believes its plan will offer consistency across the continent.

"It is important that all over Europe there is as uniform an approach as possible against it," said general secretary Gianni Infantino.

This week Blackburn striker DJ Campbell was one of six people questioned over allegations of fixing in the sport.

That followed a story in the Sun newspaper on Sunday in which ex-Portsmouth player Sam Sodje told an undercover reporter he could arrange yellow and red cards in exchange for cash.

And this month two non-league footballers charged with conspiracy to defraud as part of an investigation by the National Crime Agency into match fixing in the UK have been sacked by their club.

Michael Boateng and Hakeem Adelakun, both 22, played for Whitehawk FC, based in Brighton, in the Conference South.

Earlier this season, Fenerbahce,Besiktas and Metalist Kharkiv were all banned from European competition for match fixing.

Infantino reiterated Uefa's stance to impose "harsh sanctions" on those found guilty of match fixing, but failed to detail the precise measures within its 11-point plan.

"It cannot be that in one country you have one sanction, and another one in a different country for the same offence which goes straight into the soul of football," he said following a meeting of Uefa's executive committee in the Spanish city of Bilbao.

"One match fixed is one match too many and we have to fight against this in the most efficient way," Infantino added.

The draft plan will be sent to the 54 domestic associations, calling on them to agree consistent proposals to put before the Uefa Congress in Astana, Kazakhstan in March for approval.