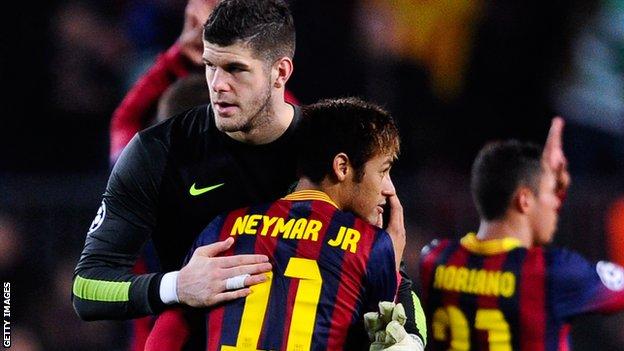 England goalkeeper Fraser Forster admits he does not know whether he will still be at Celtic when they next play in European competition.

"I don't know," Forster said when asked whether he would be part of their next European campaign.

"There's a lot of time between now and then. It is hard to say either way."

It is just important that I do the best I can do, whether it is for Celtic or whoever

Team-mate Kris Commons reacted to the hammering in Spain by suggesting that Celtic had failed to adequately replace striker Gary Hooper, who was sold to Norwich City.

Influential midfielder Victor Wanyama also left in the summer, going to help Southampton make an impressive start to the Premier League season, and Forster is being tipped as the next big-money departure for England's top flight.

The goalkeeper is in the second year of a four-year contract with the Scottish champions, but his profile has risen further after winning his first England cap against Chile last month.

"Obviously I'm contracted to Celtic and I will be for the foreseeable future, I imagine," he said.

"It is just important that I do the best I can do, whether it is for Celtic or whoever."

Forster is determined to seal his place in Roy Hodgson's squad for next summer's World Cup in Brazil.

"I've just got to be positive and do everything I can between now and the end of the season to try and force my way onto the plane with the England squad," the former Newcastle United player said.