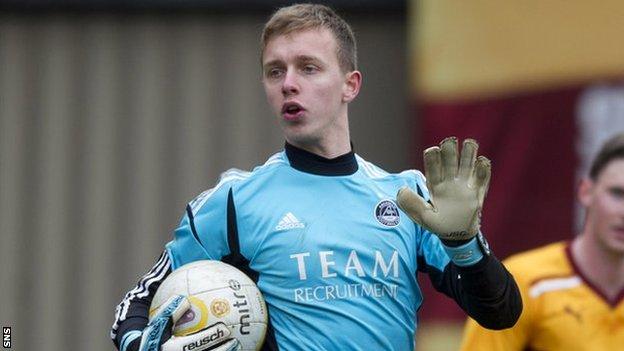 The 22-year-old Czech before switching to Dens Park but has yet to make a single appearance for the Championship side.

But Well need cover for Gunnar Nielsen, who is an injury doubt for Saturday's trip to face Ross County.

Lee Hollis is already absent through injury for the Premiership outfit.

I was here in 2009 in pre-season. I tried to get away from Bayern Munich, but they tried to get compensation and I had to leave Motherwell

Under-20s goalkeeper Ross Stewart has been on the bench in recent weeks, but Motherwell's other youth goalkeepers, teenagers Max Currie and Brett Long, also have injuries.

Twardzik, the 22-year-old brother of Celtic twins Filip and Patrik, switched to Pittodrie from the Italian third tier on an 18-month deal.

However, the goalkeeper who was at Bayern Munich and Karlsruhe as a youngster, was

Faroe Islands international Nielsen has been Well's first choice since early October but picked up a thigh injury during Friday's 5-0 defeat by Celtic and was struggling to take goal kicks in the latter stages.

Motherwell manager Stuart McCall told his club website: "We are grateful to Dundee for letting him come out on loan to us.

"I spoke to John Brown, who speaks very highly of him, and he would certainly be knocking on the door but for the form of their number one, Kyle Letheren.

"Gunnar is improving every day and we'll give him every chance of being fit, but in the worst-case scenario, at least we can go there with two fit goalkeepers."

Twardzik, who almost signed for Motherwell in 2009 but ended up at Karlsruhe, was delighted with the opportunity to return to Fir Park.

"It's hard to believe how quickly things came about. I am desperate to help Motherwell out and hopefully I can.

"I was here in 2009 in pre-season. I tried to get away from Bayern Munich, but they tried to get compensation and I had to leave Motherwell.

"I'm happy to be back, even if it's only for a couple of weeks."

With Twardzik out on loan, 24-year-old former Scotland Under-19 international John Gibson will provide back-up to Letheren for Dundee.