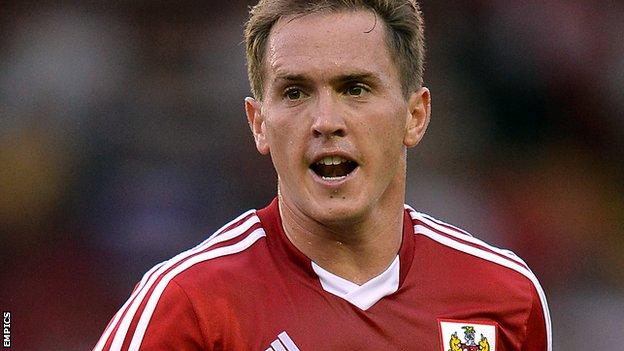 Grayson says an agreement is in place for the 27-year-old midfielder's City deal to be terminated next month.

"He'll be paid up by Bristol City, which has all been signed. From 4 January, it will be ours and Neil's decision to extend that," said Grayson.

"We'll be looking to extend that until at least the end of the season."

Kilkenny has played three times for Preston since and is nursing a calf injury that may keep him out of Saturday's trip to Crawley.

The Australia international had fallen out of favour at Ashton Gate under Sean O'Driscoll, who and has not featured at first-team level for the club since 24 September.

Speaking to BBC Radio Lancashire, Grayson continued: "The situation originally was that he was going to be paid up before he came to us. If that had happened, he wouldn't have been allowed to play for any other club.

"Once I knew that was happening, I stepped in and gave him the opportunity to come and play first and foremost.

"He still had his agreement with Bristol City [that the deal] would be terminated in January. His Bristol City career is over and hopefully his new one is with Preston North End."

Grayson added that utility man Jack King will not be out for as long as first feared with a foot injury.

King, 28, with a stress fracture of the same foot, although his latest problem is unrelated.

"We don't think he's going to be out as long as people thought," said the former Leeds and Huddersfield manager. "It might be an injury that we have to manage a little bit, in terms of the number of days he can train, and we will do.

"He's done very well for us and you want good players around the squad in a busy period of time."