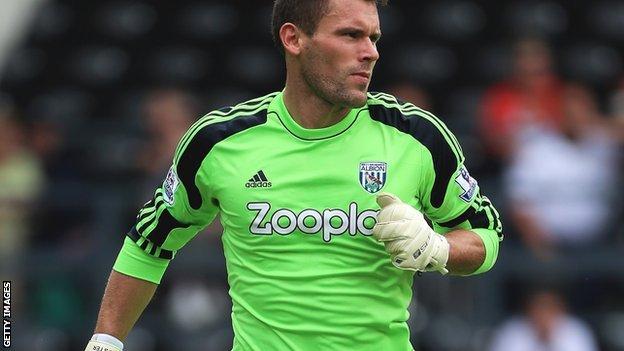 West Brom keeper Ben Foster admits his hopes of inclusion in England's 2014 World Cup squad depend on how he deals mentally with his injury.

The 30-year-old has not played since suffering a stress fracture in his right foot against Everton in August.

Fraser Forster: The 25-year-old won his first England cap against Chile in November after impressive performances in the Scottish Premiership and Champions League for Celtic.

John Ruddy: The 27-year-old Norwich keeper has only one cap to his name, as a substitute against Italy in a friendly in 2012.

Foster, who has six caps, is back in full training and wants to return to action by the end of December.

"It takes a lot to get over mentally - getting back to the full swing of things, diving about," he told BBC WM.

"It's a case of getting full fitness and sharpness, then knocking on the door and asking a few questions.

"I spoke to Dave Watson [England and Norwich goalkeeper coach] last week to let him know how I'm getting on."

Former Stoke and Manchester United keeper Foster was on the bench for England's 3-2 friendly win against Scotland in August before injuring himself at Goodison Park later the same month.

Foster added: "Now I'm back to full training it's always in the back of my head how easy it went in the first place.

"I just have to trust it - trust the scans that show that it's healed, it's clean. I have to try forget about it, but it's hard."

Foster's concern comes from the manner in which he injured himself at Everton.

"From just going to run and it snapping like that is incredible," Foster said.

"That was probably the least exertion I put on it that day - I made saves, kicked the ball and all sorts, but it was a little run that broke it."