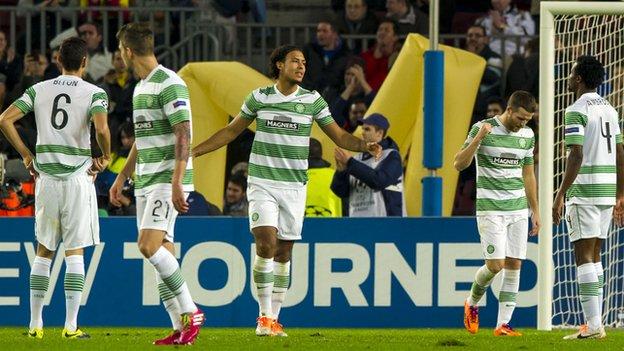 The 6-1 drubbing by Barcelona left Celtic bottom of Group H with three points and no Europa League place.

"We need to rebuild for next year because the target is to qualify for this competition again," said Commons.

"We need to have a long look at ourselves and get back in to training."

Commons said Celtic were playing for pride in the Nou Camp but had fallen below their expectations.

"Once those couple of goals went in before half time we started to lose our shape and became a little bit disjointed," he said.

"We lost that fight, that desire to stop them putting balls in the back of our net and that's something we haven't struggled with in the last 18 months in this competition.

"Barcelona have outstanding players and it's a very difficult job to stop them.

"We managed it in the last couple of games but we just didn't have that will to win right from the first whistle.

"We've got a lot of good characters and the manager wants to strengthen again with players that can take us to the next level because we have lost some big players."

Commons, who is the club's leading scorer this season with 12 goals, said the side lacked a consistent goal threat.

"In a Celtic team you are looking for a striker to get you 20-30 goals," he said. "At the minute, we haven't quite got that.

"I know people are working hard on and off the field to try to get us the goals but replacing someone like Gary Hooper is going to cost you between £6m and £10m and at the minute we are not willing to spend that.

"Looking back at the first AC Milan game; we played really well over there and came away with nothing.

"That's kind of been the story of this campaign. We've not had a great deal of lady luck, we've not really performed to the levels we know we are capable of.

"There are fine lines at this level. The mistakes we've made have been punished and the chances we had we didn't put away.

"We've been playing well in the league but not shown it in the Champions League. This is cut throat level football."