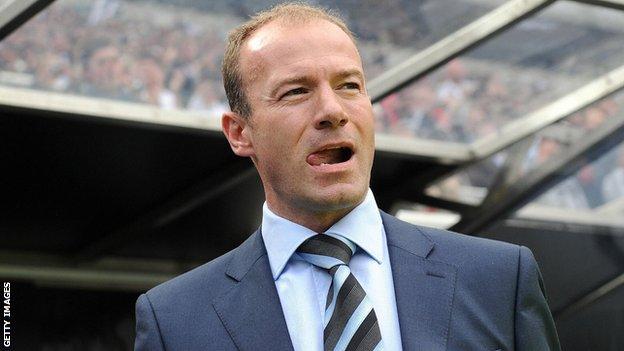 Former England captain Alan Shearer has said his short spell in charge of Newcastle in 2009 is likely to remain his only stint in football management.

Shearer quit playing in 2006 as Newcastle's record goalscorer before becoming a Match of the Day pundit.

In eight games as manager he could not prevent the Magpies being relegated.

"I love my job and know I'm lucky to have it. Could I see myself returning to management? Probably not," he told BBC Newcastle.

Born in Gosforth, just three miles from St James' Park, Shearer scored 206 goals in 404 appearances for his boyhood club after joining for a then-world record £15m fee in 1996.

He began his career at Southampton and won the Premier League with Blackburn Rovers in 1995 before moving on to Newcastle.

He was named Magpies manager on a short-term deal in April 2009, with boss Joe Kinnear undergoing triple heart bypass surgery in February and Chris Hughton in caretaker charge until Shearer's arrival.

He took over with the club two points in the relegation zone but one win in eight games saw them drop out of the Premier League, finishing one point behind Hull.

"First of all, I would say I am enjoying my media work as much as ever," Shearer said.

"But also, you have to remember I have been out of the game for over four years now.

"The longer you're out of the game, the more difficult it is to get back in and management is not something I'm looking to do."