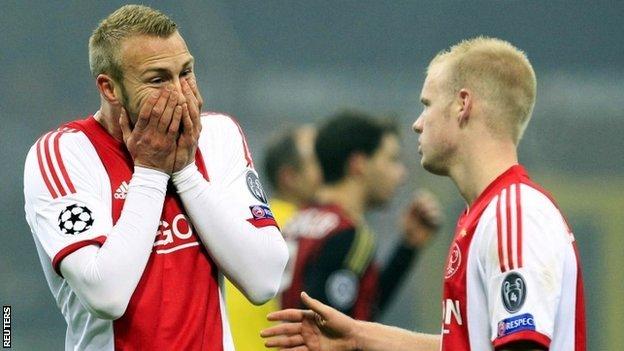 AC Milan qualified for the last 16 of the Champions League at the expense of Ajax on a night marred by crowd trouble.

Three Ajax supporters were taken to hospital after being stabbed during street fights before the goalless draw.

One supporter suffered serious but not life-threatening injuries after being stabbed in the stomach.

Milan qualified alongside Barcelona despite the dismissal of Riccardo Montolivo in the first half.

A police spokesman said: "The one with the stomach wound is clearly the most serious but as far as I understand it's not life-threatening."

The fixture was played against a backdrop of off-field incidents on Wednesday.

A street salesman suffered a minor knife wound but did not require hospital treatment and three Ajax supporters were arrested after an attempted robbery of a street kiosk.

On the field, Ajax dominated even before midfielder Montolivo was shown a straight red card in the 22nd minute for a reckless challenge on Christian Poulsen.

Massimiliano Allegri's side held on to finish a point ahead of their opponents and four behind group winners Barcelona, who thrashed Celtic 6-1 at the Nou Camp.

Poulsen hit the post for Ajax after five minutes and keeper Christian Abbiati kept the visitors at bay with a several saves.

The Dutch side failed to capitalise on their numerical advantage and have to settle for a place in the Europa League.