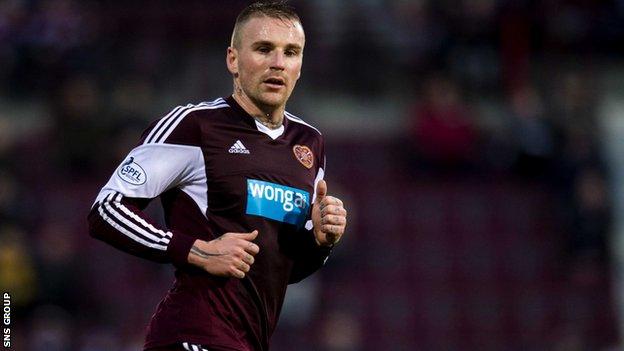 Hearts midfielder Ryan Stevenson could be out of action for as long as six weeks with a hamstring tear.

The 29-year-old hobbled off 15 minutes from the end of Saturday's 4-1 defeat to Dundee United after pulling up.

Stevenson, in his second spell at Tynecastle, has already missed two months of this term with a knee injury.

And his lay-off leaves manager Gary Locke with just two other players older than the administration-hit club's squad average of 22.

"It's a massive blow for us and for Ryan," Locke told the club website.

"He pulled up during the Dundee United match last Saturday so we decided to send him for a scan to get to the bottom of it. We had a niggling feeling that it was something serious and that was confirmed when the results came back.

"There's a tear on his hamstring so he'll miss the next four to six weeks, which is less than ideal. It's a shame for Ryan as he's not long returned from a long spell out.

"One good thing though is that the lad is a quick healer, so hopefully he gets a bit of rest and then we can manage his return."