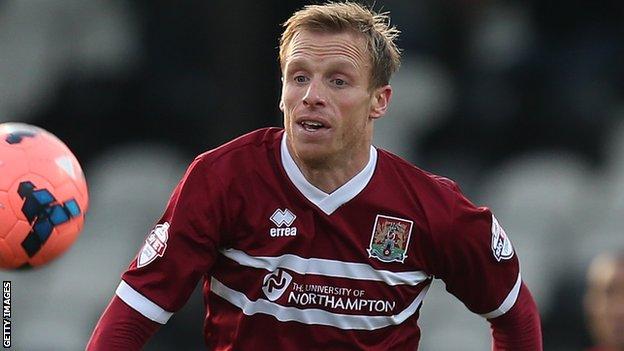 The 32-year-old has made six starts for the struggling League Two side, in which time they have won twice and drawn twice.

Manager Aidy Boothroyd said: "I think he's the kind of guy that glues a team together.

"Ricky has been there and done it. He's won promotions before and he knows what this league is all about."

Boothroyd added: "We're delighted to have got him at such a crucial time."

Ravenhill, who joined the club in November, is said to be interested in making his move to Sixfields permanent.

"It's no accident he's part of our upturn in form," said the manager. "We're on a upward curve and it's very important we turn this talk into action and get ourselves away from the bottom and continue to climb until the end of the season.

"I'm embarrassed about where we are in the league and I think it's about time we started putting that right."

The Cobblers currently have four loanees at the club, although Jacob Blyth is set to return to parent side Leicester City after Saturday's match away to Bury.