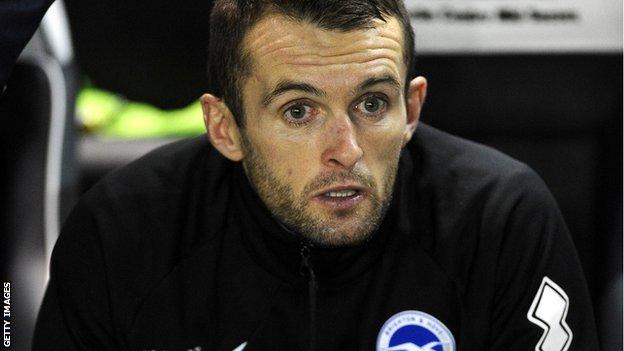 Brighton assistant coach Nathan Jones says their squad now has the strength to make an impact in the Championship.

With a long-term injury crisis easing, the Seagulls have only been beaten once in their last eight games.

"We will use all the squad and we will have to tweak things with suspensions, injuries and tactical changes.

"The other day David Lopez was having a fantastic game, but we felt we needed a different impetus. We brought Kazenga LuaLua on and he impacted.

Leo Ulloa's return to light training after two months out with a broken foot means fellow striker Will Hoskins (knee) is the only long-term absentee at Brighton.

Midfielders Kemy Agustien, Keith Andrews and Liam Bridcutt and wingers Will Buckley and Kazenga LuaLua have all returned to action in recent weeks.

"Now we have got the size of squad to cope with that.

"We have got the quality that if certain times in games determine, we can ask and demand people to do a job. We have got the players to do that and that is a pleasing thing."

Brighton had six senior players, including three strikers, sidelined with long-term injuries in mid-October, but are currently three points off the Championship play-off places despite also having to contend with short-term injuries to other players.

Brezovan had not made a senior appearance for almost a year while El-Abd enjoyed his longest run-out since August.

Jones believes their sudden return to the first team can be an example to the rest of the squad.

"We put on sessions, look after them but we demand from everyone in training so that no one rests on their laurels or cruises through a training session," he said.

"Adam and Peter are a credit to themselves. Adam impacted straight away and Peter came in and looked very composed and comfortable.

"That is something for the others to make sure that when they get opportunities that they take them."

Meanwhile, Jones hopes Albion will be able to re-sign on-loan winger Craig Conway in the future.

"He has got better, in terms of his productivity, as his loan has gone on," Jones added.

"That is normal as he has got to know everyone and got more settled. It is sad he has got to go back as we would like to keep him.

"Hopefully it won't be the last of Craig Conway. We're pleased with him, he's done excellently and we'd like him to finish off and continue with the form he is in."