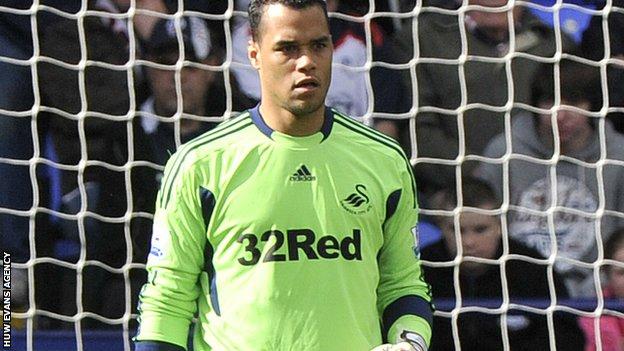 Swansea City goalkeeper Michel Vorm is to have an operation on Thursday to rectify a long-standing knee problem.

The Swans had hoped the 30-year-old Dutch international would battle through until January, but he was in discomfort against Norwich on Sunday.

The club have now decided the cartilage problem cannot be managed any longer and have booked him in for surgery.

"The length of time he will be sidelined depends on the scale of the operation," a club statement said.

"Surgeons will explore the knee before carrying out work on clearing any loose ligaments and fragments of bone."

Earlier this month Vorm said: "I have to do it now before the World Cup.

While Vorm faces a spell on the sidelines there is better news concerning Leon Britton.

The midfielder, who has missed the last five games because of a broken toe, was back in training on Wednesday.

He is expected to be joined on the training ground this week by Chico Flores.

Flores hopes to be fit for Sunday's home game against Everton.