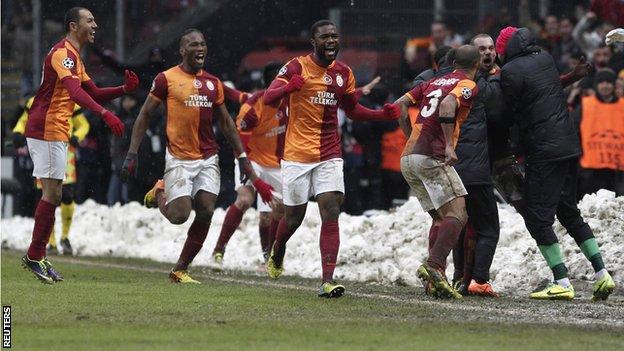 Wesley Sneijder's late winner in snowy Istanbul sent Galatasaray into the Champions League last 16 and knocked their visitors Juventus out as they completed Tuesday's abandoned tie.

The Dutch midfielder latched onto Didier Drogba's flick to finish low into the net and secure second spot in Group B for Roberto Mancini's side.

The match restarted on 32 minutes, after being suspended on Tuesday night because of snow, on a terrible surface.

Juventus have won their last seven league games without conceding a goal and knew a point would be enough to secure qualification, with Turkish side Galatasaray needing victory.

And, on a pitch that had been cut up by efforts to clear Tuesday night's snow, the Serie A leaders looked to be heading into the knockout stages without too much drama, until Sneijder's late intervention.

The sides' final Group B clash at the Ali Sami Yen Stadium was stopped on Tuesday night with the scoreline 0-0, as increasingly heavy snowfall made playing conditions nearly impossible.

With the snow still falling and the pitch difficult to play on, both sides struggled to create too many clear-cut chances on Wednesday until Sneijder burst on to Drogba's towering flicked header.

Running away from goal, the midfielder sent a low shot across goal, through a defender's legs and into the bottom corner of the net to send the vocal home crowd into wild celebrations.

Juventus have to settle for a place in the Europa League after finishing third in the group.

The Italians had the first opportunity of note just before half time when Fernando Llorente fed Carlos Tevez in the box and his right-footed shot went just wide of the far post.

At the other end, Aurelien Chedjou should have done better but struck the ball way over the bar after a good cross from Sneijder.

Paul Pogba was first to test Fernando Muslera at the start of the second half with his central effort from 30 yards kept out by the Galatasaray keeper.

The hosts then almost broke the deadlock when Burak Yilmaz fed Drogba just outside the area and his goal-bound attempt towards the far post forced Gianluigi Buffon to make a one-handed save.

Gala continued to press forward and Sneijder sent a warning in the 84th minute with a 30-yard attempt that went just wide.

But the Dutchman made no mistake seconds later as former Manchester City boss Mancini progressed into the last 16 of the Champions League for the first time in three seasons.