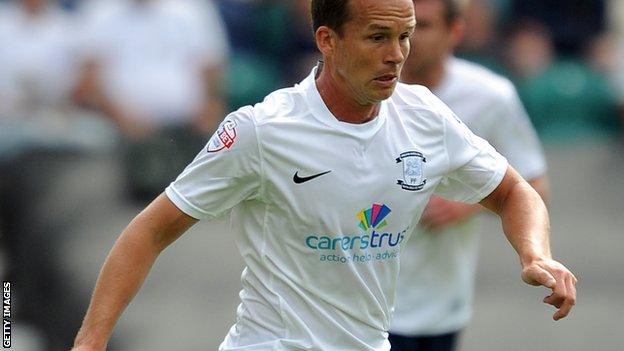 Preston striker Kevin Davies says there is "no pressure" on him to score goals for the League One side.

Davies, 36, netted just his third goal of the season in Saturday's 1-0 win at Wycombe in the FA Cup second round.

"I have never been prolific but I know what I bring to the team and we find ourselves in a good position," Davies told BBC Radio Lancashire.

Kevin Davies made his only England appearance in the Euro 2012 qualifying game against Montenegro in October 2010, coming on as a second half substitute for Peter Crouch

"It doesn't matter to me who scores, as long as I can walk off the pitch knowing I have done my bit."

Simon Grayson's side now travel to Ipswich in the third round of the competition after Davies' stunning 30-yard strike.

But it is in the league where they have particularly impressed, lying third and unbeaten in their last eight games, with their last defeat a 2-0 loss to Crewe at Deepdale on 12 October.

"It is all about what the team does," added former Blackburn and Bolton man Davies. "I am more than happy to do the unselfish things and work hard for the side.

Preston begin a run of six games in the space of 20 days against Crawley on Saturday, and manager Grayson feels it will give his team the opportunity to continue with their excellent form.

"We have to keep the momentum going and keep the confidence levels up," he said.

"There is a desire not to get beaten. We want to keep the run going as long as possible. The fixtures will come thick and fast now but I am delighted with how the team are performing at the moment."