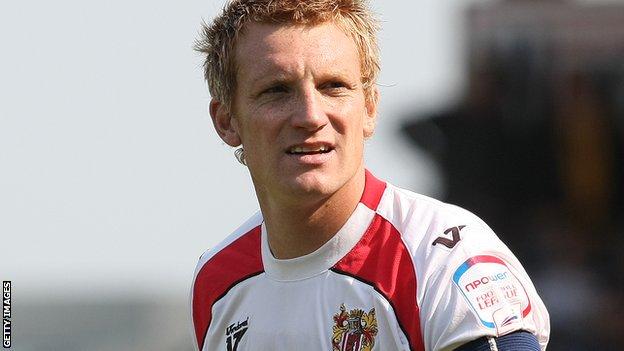 Captain Mark Roberts says playing at Wembley is a "great incentive" for League Two side Fleetwood to reach the final of the Football League Trophy.

Town beat Rotherham 2-1 to reach the Northern Section final and will face Chesterfield in a two-legged clash.

"To take the club to Wembley would have been another tremendous achievement and a day that we can all look forward to," Roberts, 30, told BBC Radio Lancashire.

"When you get to a final, you can take on any team," added the defender.

Jeff Hughes gave Graham Alexander's side the lead in the first half, which was cancelled out by Rotherham's on-loan forward Nouha Dicko, but Conor McLaughlin struck a stunning 30-yard effort to clinch victory for the Cod Army.

Fleetwood have achieved five promotions in nine years, having played in the ninth tier of English football as recently as 2004-05, but the club have only ever been to Wembley once, losing 3-1 to Halesowen Town in the 1984-85 FA Vase final.

Manager Alexander feels they now have a good chance of ending the 28-year wait for a return visit.

"It (JP Trophy) is a great competition for the lads that play at this level," he said. "I have played in it myself and I was dying to get to the final because, realistically, it was our best chance of reaching a major final at Wembley."

However, Roberts feels the team now need to replicate their cup form in the league, having won just one of their last four games and dropped from top spot to seventh.

The former Stevenage man continued: "We have beaten League One opposition in every round, improved our performance level in every game and we need to carry that on now. In the league, we are probably one of the favourites and we have to deal with that.

"We have taken that in our stride and we have to kick on in the league now because seventh is not where we want to be. We want to push on and get back in the automatic places as soon as possible."