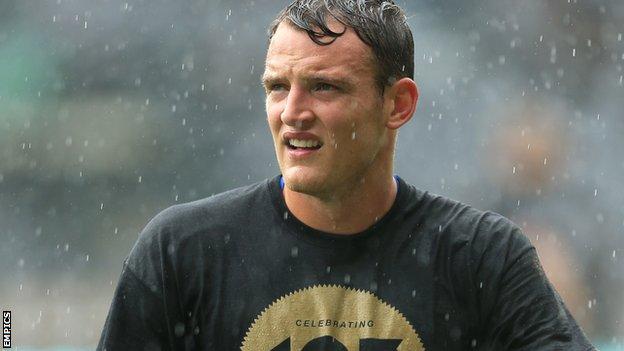 Simon Eastwood is determined to make the most of his first-team chance at Blackburn and is enjoying a healthy rivalry with goalkeeper Jake Kean.

Eastwood made his first Championship start for Rovers at QPR and kept the club's first clean sheet away from home in the league since October 2012.

Kean was left out after an error in a four days earlier.

Prior to drawing 0-0 at QPR, Blackburn's last away clean sheet in the Championship came at Nottingham Forest in October 2012.

However, during that time they did prevent Derby, Arsenal and Millwall from scoring as Rovers reached the last eight of the FA Cup last term.

"Jake was the first one to congratulate me after the game," Eastwood, 24, told BBC Radio Lancashire.

"We've both got to push each other," added the former Portsmouth man.

"I've got the shirt at the moment and I'm sure he'll do as much as I did to push him to push me. It's good competition and we both thrive off it."

Blackburn had conceded in 27 consecutive league games away from home before their last Saturday.

"It's brilliant working with a back four that's really solid," continued Eastwood, whose only previous appearance for Rovers came in the League Cup against Carlisle in August.

"Scott [Dann], Grant [Hanley] and Tommy [Spurr] are solid every week and then [right-back] Adam Henley came in and did very well.

"When you get a chance, you've got to try and take it with both hands. The lads that came in on Saturday - they've all done well, so everyone's happy."