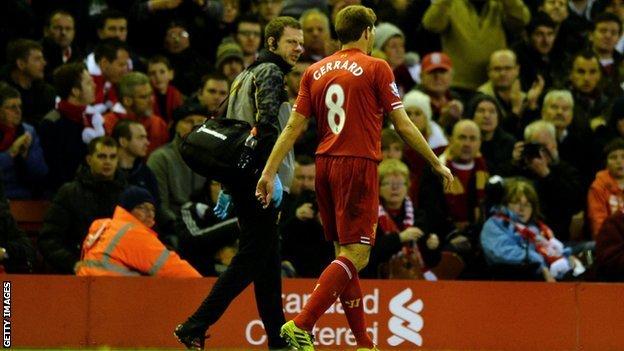 Liverpool captain Steven Gerrard will be out for at least a month with the hamstring injury he picked up in the 4-1 win over West Ham on Saturday.

A scan to determine the extent of the problem took place on Monday and confirmed that the midfielder, 33, will miss the club's busy Christmas period.

Gerrard pulled up early in the second half in the win at Anfield and joins Daniel Sturridge on the sidelines.

Steven Gerrard leads the way, along with Arsenal's Mesut Ozil, with six assists in the Premier LEague so far this season.

Sturridge was recently ruled out for up to two months with an ankle injury.

The injury problems come at a key time for manager Brendan Rodgers, with his side visiting Tottenham on Sunday as they start a series of big games.

The Merseysiders face Cardiff at home before trips to Manchester City and Chelsea before the end of the month.

Liverpool are currently second in the Premier League, three points ahead of Spurs and one in front of City, but only ahead of Chelsea on goal difference.

England captain Gerrard has played in each of the Anfield club's 15 top-flight games this season and has scored three goals.

He has also provided six assists, which is equal with Arsenal playmaker Mesut Ozil as the most in the Premier League so far this season.