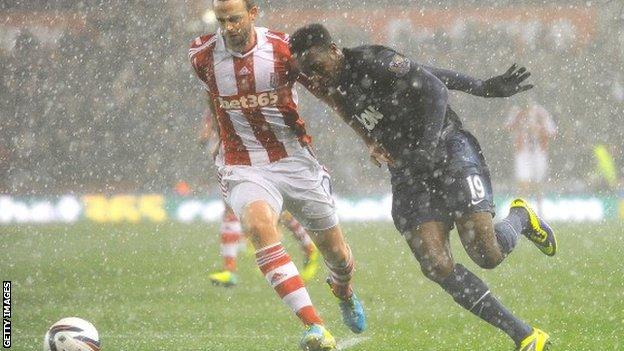 Stunning strikes from Ashley Young and Patrice Evra against Stoke set Manchester United up for a Capital One Cup semi-final against Sunderland.

Rain hindered the flow of the first half, with play temporarily suspended in the 29th minute because of hail.

But then Young lit up the match with an unstoppable shot from the edge of the box which gave United the lead.

Evra then made sure of their place in the last four with a rare curling right-footed effort.

There was a time when a Manchester United manager used this competition to blood the squad's youngsters.

But, unlike his predecessor Sir Alex Ferguson, David Moyes does not have two decades of unprecedented success to cushion him from the criticisms which would have come his way had his team lost this tie.

United's inconsistency in the Premier League this season, which has left them 10 points adrift of league leaders Arsenal, combined with Moyes's desire to secure a first trophy of the new United era, meant it was unsurprising the Scot selected a team full of familiar names.

The injured Wayne Rooney, however, was one star name missing from the squad, though his manager said before the match that he hoped the England striker would be available for the busy festive season.

For the majority of the game, those United players charged with replacing the effervescence usually supplied by injured strikers Rooney and Robin van Persie lacked poise and composure, and even after an hour the weather continued to overshadow the football as a talking point.

It was arguably a blessing the players were given the chance to regroup midway through the first half as no-one had stood out, although the men on the pitch could rightly blame the gusts and heavy rain for making life difficult.

United did begin with gusto, with Young hitting the side-netting in the second minute after being put through by Danny Welbeck.

But the visitors failed to maintain that attacking urgency and after an uneventful half-hour, the skies opened and dumped hailstones over the Britannia Stadium.

Referee Mark Clattenburg said he was unable to see the players and quickly called them from the pitch, with the teams re-emerging 10 minutes later when the elements were a little calmer.

Ultimately, it will be a match remembered for the weather and Young's show-stopping strike. The forward stylishly grabbed the opener after a clever one-two with substitute Javier Hernandez, who had been on the pitch for only a matter of minutes.

Jonathan Walters nearly inspired a Stoke fightback, the striker first launching a dangerous cross across the box, which Chris Smalling had to head away, before wasting two great chances to restore parity.

Stoke paid the price for their profligacy and it was another superb goal which ended the home team's hopes, with Evra weaving in from the left and beating Thomas Sorensen with his weaker foot.

"The conditions, especially in the first half, made it really difficult for the players.

"I think the first goal, whoever scored, was going to make a big difference.

"It was a tight game. I don't think Stoke created too many chances, either.

"Manchester United Football Club are used to winning trophies, it's just business as usual, but I've got to say we're all delighted that we're in the semi-final."

"I thought we made a fair fist of it in the first half against all the elements and thought we were in decent shape.

"Our organisation was good, United weren't creating too many chances. But United, on the night, deserved to win.

"They just had a little bit more power and pace. We weren't able to ask enough questions of them in the second half."

Check out the best photos from tonight's Capital One Cup ties on the BBC Sport Facebook page.