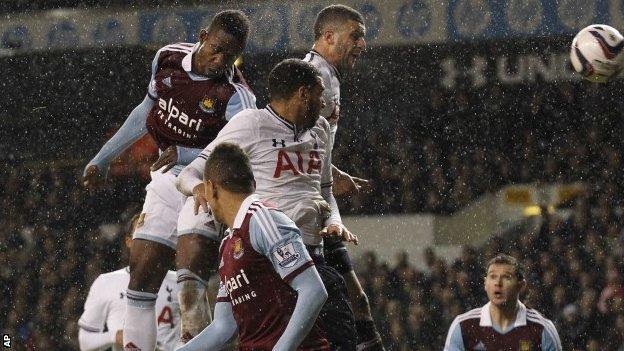 Two goals in the final 10 minutes saw West Ham come back to beat managerless Tottenham and book a Capital One Cup semi-final tie with Manchester City.

Spurs took the lead in the second half when Emmanuel Adebayor scored his first goal since May with a superb volley.

The Hammers levelled when Matt Taylor found Matt Jarvis on the left side of the area and he smashed home.

Five minutes from time substitute Modibo Maiga grabbed the winner when he headed in from Mohamed Diame's cross.

It was a stunning end to a match that only came alive in the 67th minute when Adebayor, who had previously only played 45 minutes of club football this season, crashed home a spectacular opener.

But ultimately Spurs were left to contemplate their second home defeat this week after Sunday's 5-0 thrashing by Liverpool, which led to the sacking of manager Andre-Villas Boas.

The Portuguese's temporary replacement, Tim Sherwood, will be hoping luck changes for his side on Sunday when they travel to Southampton - but this defeat will be a difficult one to recover from.

It all started well for the hosts, with three chances in the first five minutes.

The first two came during one move when Gylfi Sigurdsson's shot was blocked and Jermain Defoe fired the follow-up a foot wide from about eight yards.

In the next attack, the marauding Andros Townsend, who later came off with what looked like a hamstring injury, ran 15 yards with the ball before firing in a low strike that went inches wide.

But Spurs hit a creative block for the rest of the half, with West Ham's disciplined defence easily reading their opponents' predictable final balls.

Although Sam Allardyce's men spent much of the half on the back foot, they did manage to test Hugo Lloris, on a rare foray forward, when he dived left to prevent Carlton Cole's strike from creeping in.

The first 20 minutes of the second half were forgettable bar a moment when James Collins attempted a lofted pass back to Lloris, after play was stopped for an injury, but instead nearly caught out the keeper.

It did finally improve as a spectacle with just over 20 minutes remaining when Adebayor launched himself at Defoe's cross and volleyed the ball in off the underside of the bar.

That woke the Hammers up, with the impressive Taylor launching a fierce drive that Lloris prevented from bursting the net.

They then equalised with a goal typical of an Allardyce-led team. Keeper Adrian launched a long punt downfield which was headed down to Taylor. The midfielder found Jarvis on his left and he scampered a couple of yards before firing home.

Five minutes later, the match turned on its head when Maiga, who came on for Cole in the 65th minute, scored his first goal for a year when he rose highest to head in Diame's delivery.

The Mali forward came close to adding a spectacular second in stoppage time, but saw his shot rebound back off the crossbar.

Check out the best photos from tonight's Capital One Cup ties on the BBC Sport Facebook page.

"As the game wore on both teams had to go for it. Neither of us wanted it to go into extra-time.

"It is what you can do when the spaces get bigger and bigger. We improved after Emmanuel Adebayor's goal.

"We saw the shaken nerve ends of Tottenham when we scored. We then went for the jugular. Our substitutes, who came on with fresh legs, exploited the spaces."