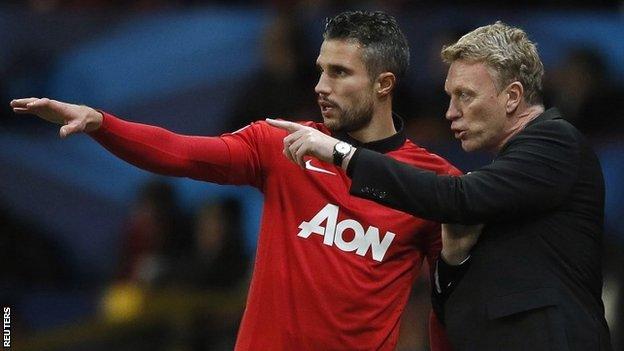 Manager David Moyes says Manchester United are among the favourites for the Champions League but need to improve.

The three-time European champions have suffered from indifferent form in the Premier League, but finished top of Champions League Group A after a 1-0 home victory over Shakhtar Donetsk.

"I think we could be classed as one of the favourites," said Moyes.

"We'll have to improve in order to progress. A club like Manchester United has to be trying to win the trophy."

The Scot, who replaced two-time Champions League winner Sir Alex Ferguson in the summer, added: "You have to get better as the tournament goes on.

"It's a tough competition, a hard one, but we will take it one game at a time."

Phil Jones scored the only goal against Shakhtar as United avoided a third successive home defeat, something that had not happened since 1962.

Domestic league losses to Everton and Newcastle led to criticism of Moyes and his players, while defender Jonny Evans said the side had been affected by a lack of confidence.

The current champions have already lost three times at Old Trafford in the Premier League this season, as many home defeats as during the whole of their title-winning campaign in 2012-13.

United are ninth in the table after 15 games, 13 points behind leaders Arsenal.

Reflecting on the difference between his side's domestic and European form, Moyes added: "I do believe there is a different style and you can tell the players here are used to it.

"They are well experienced in European football so I think they are more than capable of playing at this level. They are comfortable with it.

"They are also very comfortable in the Premier League but at the moment they are not showing it."

United began poorly against a confident Shakhtar side, who needed a win to guarantee their passage into the knockout stage, but missed out - Bayer Leverkusen of Germany qualifying instead.

Moyes admitted that his team "didn't play too well in the first half" and "were fortunate not to go a goal down".

And shortly after the substitutions, Jones scored the winner when he volleyed in a bouncing ball from Van Persie's corner from 12 yards.

"It bounced nicely for me and thankfully it went in," said 21-year-old England international Jones.

"Hopefully, we can start a run now and kick on. It's really time we did."

United, who now take a break from European competition until February, are away to Aston Villa in the league on Sunday before a League Cup quarter-final tie at Stoke the following Wednesday.