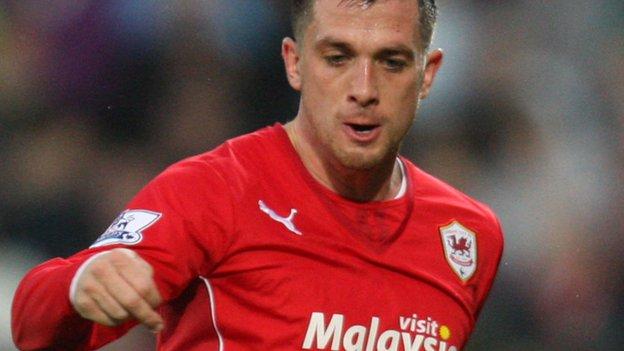 The 27-year-old missed Cardiff's games against Stoke City and Crystal Palace with a calf injury.

The former Middlesbrough and Watford defender trained on Tuesday and hopes to face West Brom.

"I'm good now. Everything seems to be ok so fingers crossed I should be fine for the weekend," Taylor said.

Wales international Declan John deputised for Taylor in the home draw against Stoke and in last Saturday's 2-0 defeat at Palace.

John recently signed a new long term contract with Cardiff and Taylor says the 18-year-old is one for the future.

"I thought he did great," Taylor said of John's performances against Stoke and Crystal Palace.

"Crystal Palace was a really tough game for everybody involved, they made it difficult. It was a great experience for him.

"He's got a lot of potential - great for us, great for Wales and hopefully he's got a big future."

Cardiff have won only once in nine matches and the Bluebirds now sit just one point above the relegation zone.

On Saturday they host a West Brom side who are only a point above them in 15th spot in the Premier League.

"It's a big game. There's no hiding the fact we could do with wins," Taylor added.

"If we lose the game we're not relegated, it's not the end of the world.

"But at the same time a win would do us the world of good [and] jump us right up the table above West Brom.

"It would set us up nicely for the Christmas period."