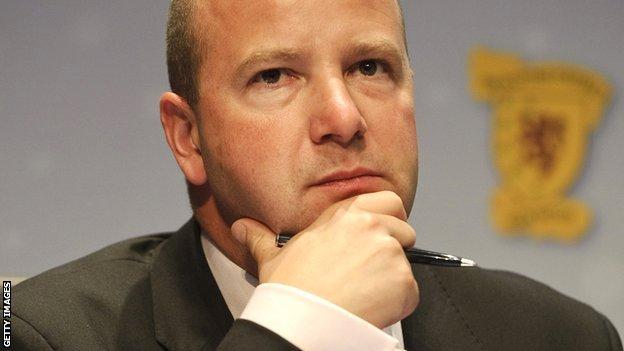 The Football Association of Wales ruling council has voted in favour of introducing an age limit on its members.

The move, recommended in a wide ranging review of the FAW, prevents people over the age of 70 standing for election to the FAW council in 2016.

There had been no age limit on membership of the ruling council, with its oldest member in his 90s.

The review was commissioned by the FAW in 2011 and published on the Welsh Assembly Government's website in October.

FAW chief executive Jonathan Ford (pictured) admitted it had been a ''painful process'' to recognise change is required.

The council discussed 55 of the 88 recommendations in the review at the meeting in Llandrindod Wells.

The rest will be discussed at another gathering in January.

Apart from the age limit issue councillors voted to set up international, community and global committees.

"We'll look now at who should be on them," said FAW President Trefor Lloyd Hughes.

"I think square pegs in square holes is vital when they decide who's going to be on them."

Mr Lloyd Hughes admitted that the changes "could have been a lot more radical" but said they would benefit the game in Wales in the long term.

"It is something new but it's going to be a slow process," he said.

"I honestly, honestly believe that we should have younger people because there's a new vision they have.

"We have to go down that way and discuss with youngsters 'come on board, we want you'.

"I pleased there is a concrete base there now and I just hope that people realise it can't be done overnight."