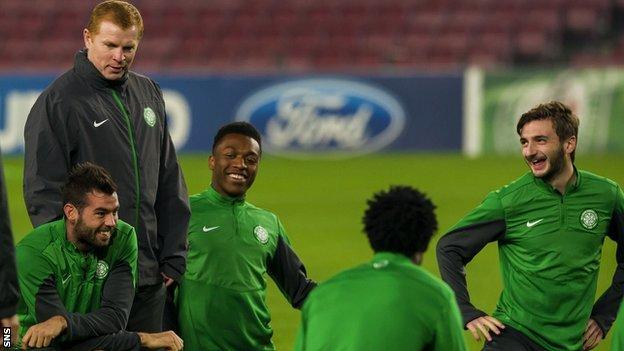 Neil Lennon admits it will require a huge Celtic performance to take anything from their Champions League match against Barcelona.

Celtic are already guaranteed to finish bottom of Group H no matter what happens in the Nou Camp on Wednesday.

"We're going to need great discipline, concentration and athleticism," Lennon said. "We have to be brave on the ball.

"Even then, that might not be enough, but what I want to see is an all-round performance from the team."

Barcelona need a point to guarantee qualifying for the last 16 as group winners.

Celtic have only taken three points from this season's Champions League campaign, but manager Lennon insists this match against the Spanish giants still matters.

"This is a game where there's a great sense of occasion to it, no matter what the circumstances are," he said.

"There's great anticipation amongst the players and supporters and myself. There's great respect between both clubs because both have great traditions and a great affiliation with each other."

The home side were equal to their visitors on that occasion until captain Scott Brown was sent off for aiming a kick at Barcelona forward Neymar.

Brown served a three-match suspension and returns for Wednesday's encounter.

"Scott knows that he was in the wrong and he has served his punishment," said Lennon.

"He is looking very much forward to playing tomorrow. It hurt us because he's our captain and he's certainly a leader on and off the field.

"Neymar looks like he's going to be a very special player. I think he's going to light up the footballing world over the next five to 10 years.

"The first time I'd seen him close up at Celtic Park I was very impressed by his ability, his pace and what he brought to the Barcelona attack.

"If he stays in that vein, which I'm sure he will, he's going to be a fantastic player for club and country.

"I think there's a little bit of immaturity at times with all young players when they tend to exaggerate contact, but that's okay.

"He'll gain a lot more respect as he goes along in his career once he learns to deal with that in the right way."

Lennon also reserved a special mention for one of his own improving stars: goalkeeper Fraser Forster.

The England international's fine form has made him subject of speculation linking him with moves away from the club.

"It shows the progress that he's made at Celtic over the last three years to the point where he is now capped by England," added Lennon.

"We're delighted with the form he's shown, particularly in the Champions League. He's at an age where he's still not reached his peak and his best years are still ahead of him.

"I think he's be a good goalkeeper for any team, but I'm hoping he's going to be a Celtic for a little bit longer."