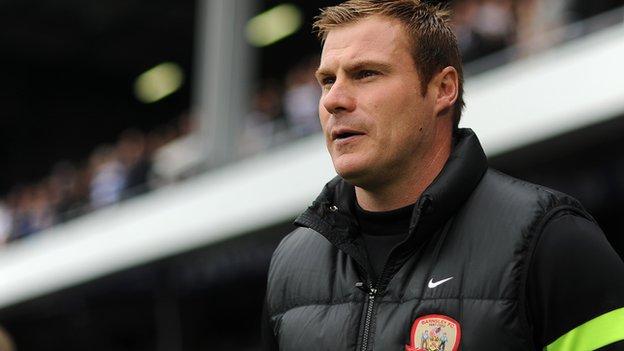 New Bury manager David Flitcroft plans to build his own team when the transfer window reopens in January.

The 39-year-old took over on Monday from Ronnie Jepson, who was placed in temporary charge in October after the League Two club sacked Kevin Blackwell.

"That is what I do well - I recruit and will try shape this squad into a David Flitcroft team," he said.

"We don't need funds, there is a lot of quality about - I've been to a lot of games and I've got a lot of contacts."

David Flitcroft returns to Gigg Lane as a manager seven years after he left as a player. The former Preston Northern End, Chester City, Rochdale and Macclesfield Town midfielder played more than 100 games for the Shakers between 2004 and 2006.

"Those players I've identified are hungry, they want to be part of what we are doing. There are lot players out there that are not playing a lot of first-team football and we will be working on that in January."

Blackwell made 23 signings before he was dismissed in October with the Shakers fourth from bottom in League Two.

Flitcroft, who made more than 100 appearances for Bury between 2004 and 2006, said those players have the rest of December to stake a claim for inclusion his new-look squad.

"With the squad we have got here, we've got to mould that in the next four games into something that is competitive and get some points on the board.

"Everything I do from this point on will be professional, not personal. If a certain player doesn't fit what we are trying to do from a football view, then I'll be honest with that player and I'll let him know where he stands."

Flitcroft took over at Barnsley in December last year with the Tykes bottom of the Championship, and helped them survive relegation on the last day of the season after leading them to nine wins from 21 league games.

He was dismissed last month after less than a year in charge at Oakwell, with the Yorkshire side bottom of the league once again,

However, after just nine days out of a job, it took Bury chairman Stewart Day, who completed the club's takeover in May, less than "10 minutes" to convince Flitcroft to return to Gigg Lane as a manager.

"It is a different Bury now - the chairman completely blew me away from the minute I met him," Flitcroft added.