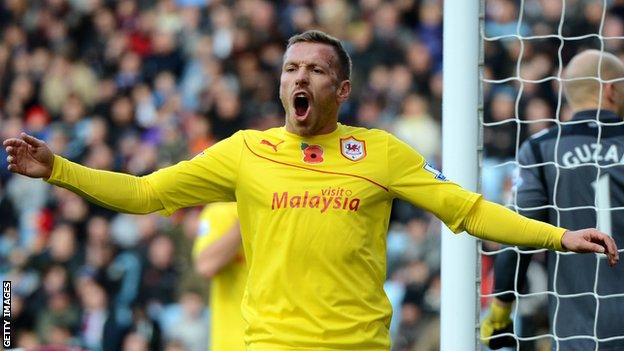 Cardiff striker Craig Bellamy says the club's debut season in the Premier League is all about survival.

Last season's Championship winners currently lie 16th in the table - one point above the relegation zone.

Bellamy is struggling with a knee injury for Saturday's clash with West Brom, who have lost their last three games and are only a point above them.

"Top 15? We would definitely take that. You just want to stay in the league," said Bellamy.

The Bluebirds have won only once in nine matches and suffered a disappointing defeat to struggling Crystal Palace last weekend.

Bellamy has so far made just six starts for the Bluebirds and last played for his hometown club in the loss to Aston Villa on 9 November.

But the 34 year-old, who retired from international football in October, hopes his experience of playing in the top flight will help city's bid for survival.

"The Premier League doesn't take any prisoners," said Bellamy, who has played in England's top division for eight sides including Newcastle, Liverpool and Manchester City.

"I've been very fortunate to be a part of it for a long part of my career, so I do know what the Premier League is about and it's been a big experience for us so far," said Bellamy.

"The aim is to maintain our position in the Premier League. That would be a great achievement for us.

"If we can do that then it would be a great, great year for us."