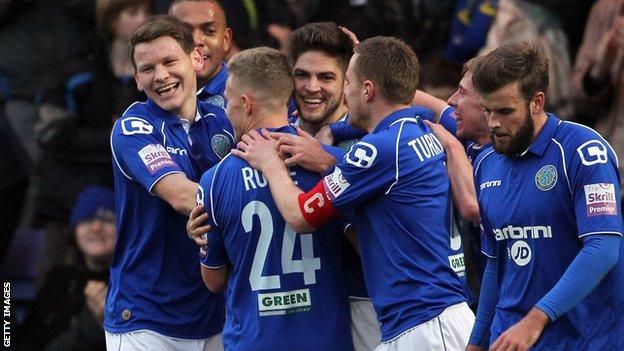 Macclesfield boss John Askey says his players must not let the club's financial problems distract them from their run in the FA Cup.

The Conference Premier side beat Brackley Town to set up a third-round home tie with Sheffield Wednesday.

Macclesfield need £150,000 of investment before the start of 2014 to ensure their survival next year.

"We need to do our best to win and everything else looks after itself," Askey told BBC Radio Manchester.

Macclesfield Town's 3-2 win over Brackley Town on Saturday means that the Silkmen have progressed to the third round of the FA Cup for the third successive year.

Last term they beat Championship leaders Cardiff City 2-1 to earn a place in the fourth round for the first time in their 139-year history.

"Once the players are on the pitch they can only concentrate on playing. We have done well so far, and the money that has come in has been much needed.

"It's a game that if we play well in and Sheffield Wednesday do not perform on the day, then we can progress and that means about £67,000 in prize money to us.

"It means a great deal to us, hopefully we will have a full house at the game. The game will be good for the town and the players."

Despite a lucrative run to the fourth round of the FA Cup last term - ending at home to eventual champions Wigan Athletic - Macclesfield have since flirted with financial ruin.

The Silkmen ended last season £500,000 in debt and revealed in June that they would have been close to a winding-up order but for the help of Cheshire East Council.

Askey said Moss Rose would be an uncomfortable place for the struggling Owls, sitting second-from-bottom in the Championship, to visit in January.

"They will not fancy coming here as they are struggling themselves at the moment," he said.

"It is one of those games that, if we can put on a good performance and keep it tight then nerves might get the better of them and that could be to our advantage."