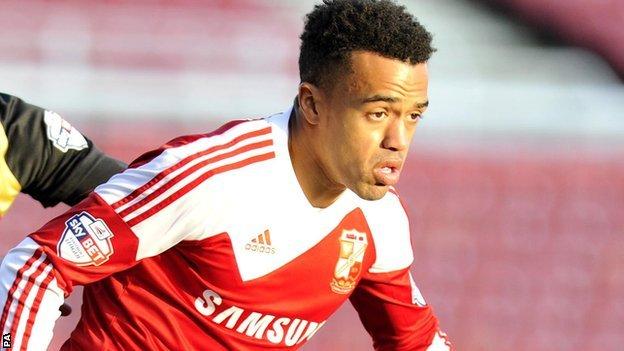 Striker Nicky Ajose is unsure where he will be playing beyond January, with his loan at Swindon set to expire.

The 22-year-old arrived at the County Ground in August from League One rivals Peterborough United and his Town deal runs until New Year's Day.

Ajose struggled for a first-team place at London Road following his move in 2011 and admits he has not spoken to his parent club about his future.

"It's not the best situation to be in," he told BBC Wiltshire.

All of Ajose's 29 career goals have come during loan spells at Bury, Chesterfield, Scunthorpe, Crawley and Swindon.

"I don't really have much contact with them [Peterborough] and I don't think I'll be talking to them about much.

"It's not something I can really control. I've just tried to do my best on the pitch when I've played and it's up to other people to sit around the table and talk about.

"Obviously everyone likes to have their future sorted, but I'll just try to train every day and try to do well to give myself the best possible platform for the future - wherever that may be."

Ajose has scored eight goals in 16 appearances for Swindon, but has spent much of his time as a Peterborough player out on loan, having previously had spells at Scunthorpe,Chesterfield,Crawley and Bury.

The former Manchester United trainee is contracted to Posh until the summer of 2015, but is enjoying his latest spell away from the club.

"What we've got here is great management staff, a young team who are all trying to develop their careers and I think it's been good for me," he added.

"I think it's brought out some good play from myself, I've enjoyed my time here and obviously I'm not finished yet. I'm just going to enjoy every game and every session."