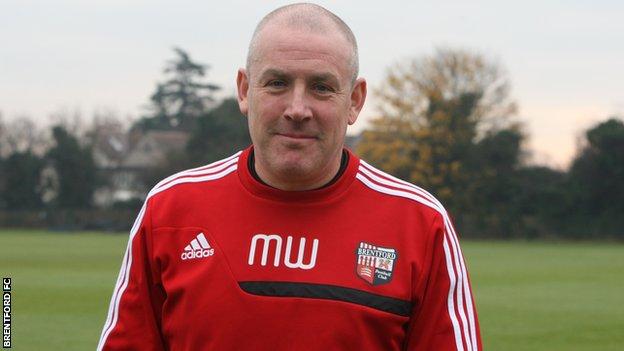 The 51-year-old has taken over the League One side until at least the end of the current season.

He joined the Bees in February 2011 as interim first-team coach and was named sporting director that June.

Working alongside Rosler following the German's appointment as Brentford boss in June 2011, Warburton helped build the playing squad which finished third in the table last season.

He has also overseen the opening of a new category two academy and recruited new members to the backroom staff at Griffin Park.

Formerly a youth coach at Watford, Warburton was the co-founder of the NextGen series, a European club competition for under-19s which ran for two seasons between 2011 and 2013.

Devlin said Brentford owner Matthew Benham was keen to have a seamless transition at the west London club after Rosler decided to join the Latics.

"The owner was very clear on the style of football he wanted and he knows Mark buys into the playing ethos we have got," he said.

"Mark has had a lot of input into the acquisition of pretty much most of the squad we have at first-team level.

"He offers us continuity and real energy and passion for someone who wants to grasp the opportunity.

"He is someone the players know and respect. We had a lot of people apply for the job but sometimes it is better to go with continuity rather than a headline name."