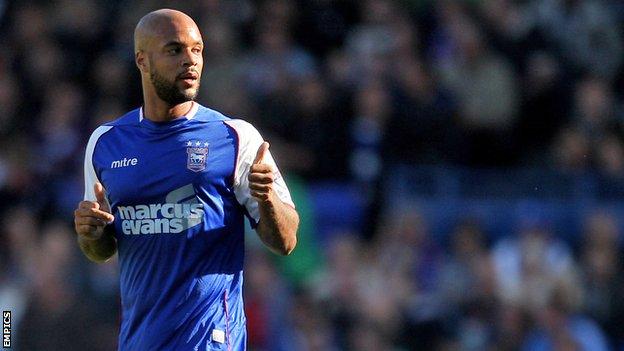 Ipswich Town manager Mick McCarthy has praised the contribution of strikers Daryl Murphy and David McGoldrick to his side's charge up the table.

The pair, who were free transfers in the summer, have 14 goals between them this season.

"Murphs is stronger, powerful and a better target. David is more technical. If you mixed the two of them together you'd have one hell of a player."

Both men scored as Town at the weekend to climb up to ninth in the Championship, two points off the play-offs, and register a third successive win and a fourth victory from their last five games.

Murphy, 30, has contributed six goals, while 26-year-old McGoldrick has been on target eight times, with the pair having started all but three league games together this term.

"As a partnership they are doing remarkably well," added McCarthy. "I think they enjoy playing off each other and it's great they're getting the goals. It gets your team up the league."

Another Ipswich striker who has been among the goals is youngster Jack Marriott.

The 19-year-old academy product has netted seven times in five games during a loan spell at Conference Premier Woking.

He has also signed a new deal at Portman Road, for an unspecified length of time.

"Jack's going out, getting experience and has signed a new contract," McCarthy said. "We're delighted he's getting that experience and hopefully can bring it back here and score for us.

"But Woking's league is a hell of a lot different to here. But he'll be getting great confidence."