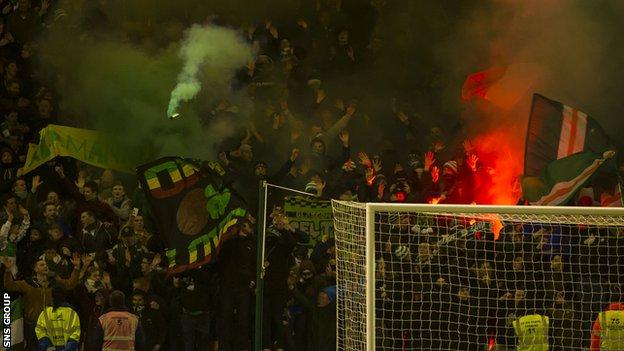 Police expect to make "a number of arrests" in relation to the disorder at Motherwell's Fir Park during last Friday's match against Celtic.

Smoke bombs and flares were also thrown during Celtic's 5-0 success.

Celtic boss Neil Lennon said recent events have cast a negative light over his team's performances but that "our fans remain the best in the world bar none".

Lennon added: "Our supporters are the best in the world bar none & nothing will take away from our great reputation throughout the world."

"I don't think it left the club with any other option but to suspend some fans," said Mjallby.

The Scottish Professional Football League described the scenes at Fir Park as "shameful" and promised an investigation once it receives its match delegate's report.

The precautionary suspensions imposed on fans will cover matches away from home as well as at Celtic Park.

The club statement added: "These events were an embarrassment to our great football club and are absolutely indefensible."

Talking on Celtic's departure for Barcelona on Champions League duty, Mjallby added: "It is very unfortunate what happened.

"You don't want to have mayhem, you can't have this disruption inside sports grounds so we have to get together to support the club in the best way.

"It is a distraction I don't like to see because I like to work with the players.

"The club has reacted in the best way."

Supt McAllister, of the Football Coordination Unit for Scotland, added: "We fully expect to make a number of arrests next week in relation to those individuals that were involved in that disorder and carried out acts of vandalism within Fir Park."