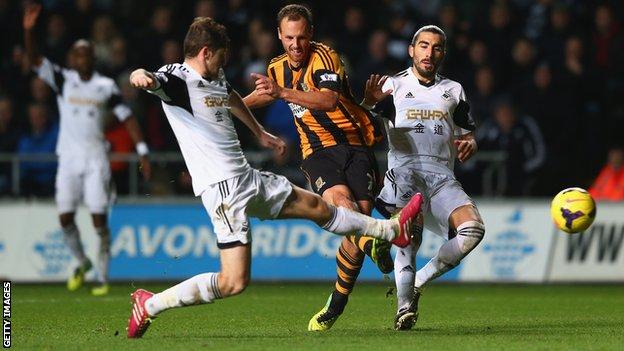 Swansea manager Michael Laudrup admitted his side had been below their best in having to settle for a 1-1 draw at home to Hull City on Monday.

"We got the equaliser but overall we did not deserve to win," said Laudrup.

"It was a game we really wanted to win [but in the] first half we did not move the ball fast enough."

He added: "We know they are very well organised and things got even more difficult when they scored.

"They came to get one point. They got it.

"In the second half [we were] better… [but] none of us created enough to deserve the three points."

Hull manager Steve Bruce believed his side should have had a penalty when Dwight Tiendelli appeared to handle the ball in the penalty area.

"The boy has practically caught it, signed it and kicked it into the stand," said Bruce.

But Laudrup thought it was a less than clear-cut claim.

The game was the first of three in seven days for the Swans. On Thursday they travel to St Gallen in Switzerland needing a point to qualify for the knockout stages of the Europa League.

That is followed by a Premier League trip to Norwich on 15 December.

Laudrup hinted that Michu, who played the full 90 minutes after recovering from a an ankle injury, would not play in St Gallen in order to be ready for Norwich.