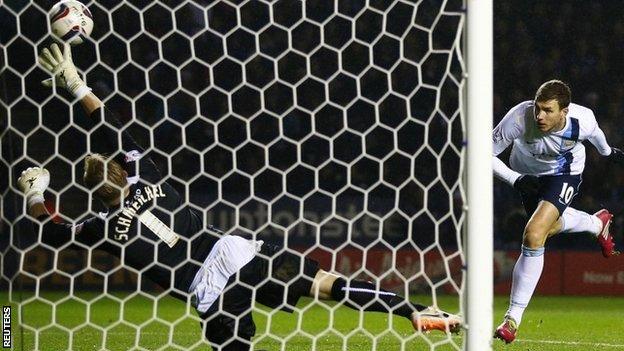 Edin Dzeko scored twice as Manchester City booked their place in the Capital One Cup semi-finals with an impressive display against Leicester.

Left-back Aleksandar Kolarov scored the visitors' opener with a fantastic 25-yard free-kick, before Dzeko headed in his first from James Milner's cross.

The Bosnian striker netted his side's third after the break when he side-footed in from another Milner ball.

Lloyd Dyer scored a late consolation when he drove in at the near post.

That strike, 13 minutes from time, was the only effort that troubled Joe Hart in the visitors' goal, as the players picked by Manuel Pellegrini performed at near-optimum level to quell any possibility of an upset.

Despite eight changes, they gave the third-placed Championship club little time to settle, with Kasper Schmeichel forced into an uncannily accurate impression of his father Peter just five minutes in, when he raced out and spread himself to thwart Jack Rodwell.

But two minutes later, the Dane was beaten by a powerful free-kick from Kolarov, who also scored against Leicester in the FA Cup almost three years ago.

Schmeichel then made another splendid stop to deny Dzeko from point-blank range following a scintillating move involving Kolarov and David Silva.

However, the Bosnia forward finally got the better of Leicester's number one when he judged Milner's deflected cross perfectly to head in at the far post.

The visitors did not relent after the break, with Schmeichel needing strong hands in the opening minutes to prevent Milner and Dzeko from scoring with fierce shots.

But, in the next attack, he was beaten by accuracy rather than power when Dzeko stroked in the third from Milner's pull-back.

The Premier League side, who have now won all five of their away matches in cup competitions this season, slackened off in the closing stages - and their hosts took advantage.

Winger Dyer, the Foxes' biggest attacking threat, was played in by full-back Paul Konchesky before smashing home off the legs of Vincent Kompany.

Nigel Pearson's side threw everything they had into the final minutes, but the visiting side saw the game out comfortably.

"We had a very good first half, and then we had the possession and dominated the game until they scored.

"It is an important competition, it is important to win every game you play in and to get to the final at Wembley would be wonderful for the supporters.

"I think the League Cup is different to normal because we could have Tottenham or Manchester United also in the semi-final so that would be beautiful for the fans."

"They were probably too good for us. Looking at the first goal, it was a great strike, but the the second and third goals were disappointing from our perspective.

"When you play against sides as good as Man City you have to give yourself the best chance. We got punished for small mistakes."

Shots on Target
Home4
Away10