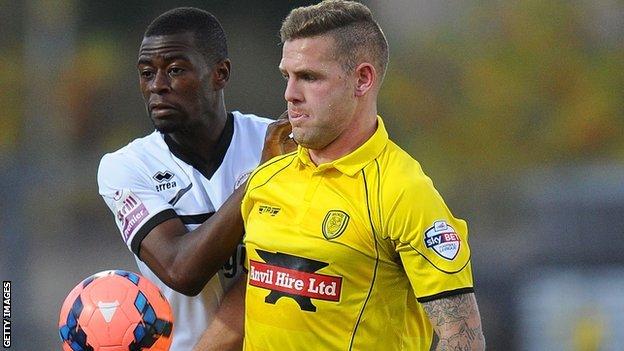 Burton Albion after a Billy Kee goal sealed a win over Fleetwood Town.

Both sides had been limited to speculative shots when Chris Hussey nodded down to Kee, who controlled on his chest and lashed in from 18 yards.

He could have made the game safe on the hour, but somehow shot well over from less than 10 yards out.

The visitors rallied but could not create a clear-cut chance as the Brewers held firm to progress.

"I'd say that's probably as well as we've played at home.

"We just asked them before the game to play with a bit more quality and a bit more composure.

"Yes, we want to get it into the front but, if that's not on, it might be that we have to take another touch or make another couple of passes.

"I thought we made some really good decisions across the park."

"The first 45 minutes was pathetic. It was like we didn't want to be here and didn't want to get through to the next round, and that's cost us the game.

"It wasn't a competitive football team and I don't think anyone, as a professional, would like to put their name to that first 45 minutes effort-wise.

"I can forgive people misplacing passes, but if you haven't got the desire to compete in a game, you're going to get turned over."