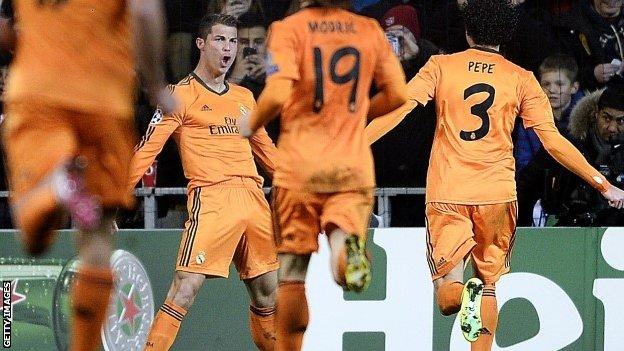 Cristiano Ronaldo became the first player to score nine goals in the group stage of the Champions League as Real Madrid finished their campaign with a win at chilly Copenhagen.

Real, who finished top of Group B after five wins and a draw, took the lead through Luka Modric who curled the ball into the top-right corner.

Ronaldo scored his record goal when he latched on to Pepe's ball to fire in.

He should have added another but had his penalty saved by Johan Wiland.

Ronaldo was making his return to the side after three games out through injury and suspension, while £85m-signing Gareth Bale also started after he had missed Saturday's 0-0 draw away to minnows Olimpic Xativa in the Copa del Rey because of illness.

And late in the game, Bale failed to score his 10th goal of the season when he missed from three yards out.

Shots on Target
Home1
Away10