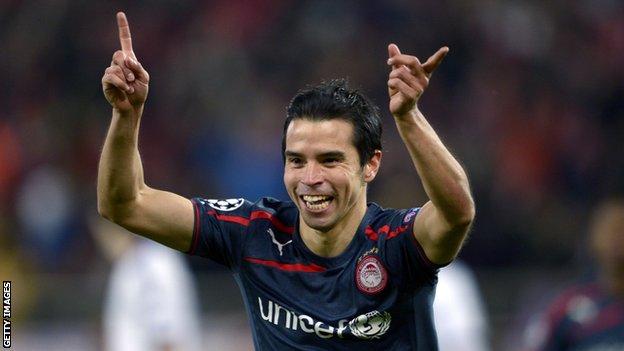 Olympiakos missed two penalties against eight-man Anderlecht but still won to qualify for the last 16 of the Champions League.

Defenders Cheikou Kouyate and Fabrice N'Sakala were both sent off for two bookable offences.

Goalkeeper Silvio Proto was then dismissed for bringing down Vladimir Weiss for the third penalty.

Anderlecht, who have failed to win in this season's competition, equalised through Sacha Kljestan, but then had Kouyate was sent off four minutes into the second half, having been shown a second yellow card for a handball in the area.

Saviola saw the resulting penalty saved before he added a second goal from close-range.

Weiss also missed from the spot after he was bought down by N'Sakala, who was booked for the foul.

The visitors were down to nine men with just two minutes to go when the Frenchman was shown his second yellow card before Proto followed in injury time.

Striker Aleksandar Mitrovic took over in goal, but was unable to stop Dominguez adding a third goal from the penalty spot.

Olympiakos needed to match Benfica's result against Paris Saint-Germain - a 2-1 home win - to make certain of qualification and they went through with the French Group C winners.