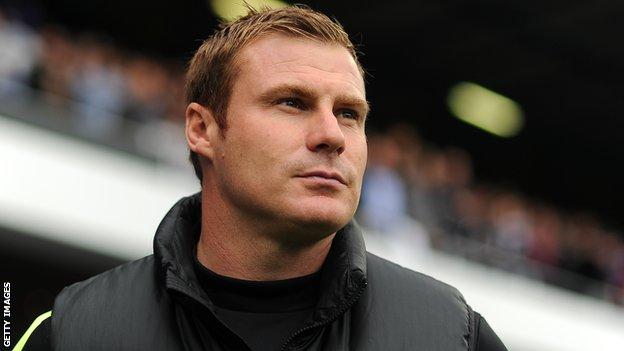 He replaces Ronnie Jepson, who was placed in temporary charge in October after the club sacked Kevin Blackwell.

"David is a dedicated individual who will not accept anything but the best for Bury Football Club," said chairman Stewart Day.

"He had received offers from other clubs at a higher level, but he has bought into what we are trying to achieve at this club and has committed his future to take us back to where we belong, the Championship."

Barnsley sacked Flitcroft as manager on 30 November after less than a year in charge at Oakwell, with the club bottom of the Championship.

Jepson, 50, was placed in temporary charge at the JD Stadium until January after receiving the support of the squad, but the former Bury striker was unable to reverse the team's fortunes with them 20th in the table, only two points above the relegation zone.

The Shakers won two, drew four and lost two of the eight League Two matches that Jepson was in charge for, but he also saw his team lose 2-1 to Conference Premier side Cambridge United in an FA Cup second round replay.

"Together with the board I would like to thank Ronnie for all his hard work and commitment and wish him well for the future, but he will be leaving the club with immediate effect," Day added.