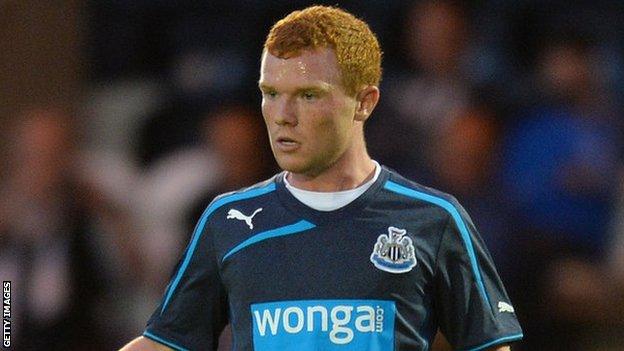 St Mirren are close to signing teenage striker Adam Campbell on loan from Newcastle United at the second attempt, according to agent Spencer Downey.

But Downey has warned that an extension to from the Magpies is not certain as there is interest from Championship clubs.

The 18-year-old Campbell was but

"We're hoping to have that one tied up for 1 January," said Downey.

He's a live-wire striker and will bring so much to that team. Steven Thompson will love him

It means that the striker would be available for the Scottish Premiership match against Kilmarnock 24 hours after he turns 19 on New Year's Day.

But St Mirren manager Danny Lennon has remained keen to make the England Under-19 international the latest product of an affiliation agreement with Newcastle.

"Danny thinks he is fantastic," said Downey, who suggests that Campbell will be a good foil for veteran striker Steven Thompson.

"He's wanted Adam for a while and probably should have gone up there in August, but it didn't work out that way.

"Newcastle value what St Mirren have done for Paul and Conor and believe sending Adam up there would be good for him.

"He's a live-wire striker and will bring so much to that team. Steven Thompson will love him.

"He has so much energy and is rapid. He has a good shot off of both feet and will score goals."

Campbell is highly rated by Newcastle manager Alan Pardew and made three Premier League appearances last season and another two in Europa League ties - but has yet to feature for Newcastle this term.

Pardew will be hoping that a spell in the Scottish top flight will help the teenager match the progress of full-back Paul Dummett,

Newton is in his second loan spell with the Buddies and Downey is also working on a deal that will result in the loan being extended until the end of the season.

St Mirren chief executive Brian Caldwell hopes to have the paperwork "concluded soon rather than later", but the 22-year-old's representative said: "Because of how well Conor is doing right now, he is attracting interest from clubs in the Championship.

"But he wants to stay where he is. Newcastle would like him to stay because he's progressing week in, week out.

"However, a lot of people are watching the SPL because it's a great breeding ground.

"But the question remains that, with Conor doing so well, do we leave him where he is, or allow him to move on to a club in the Championship where he may have to settle in all over again?

"Both Danny Lennon and his assistant, Tommy Craig, are both clear when they say he is good enough for the Championship. He has good energy and skill."