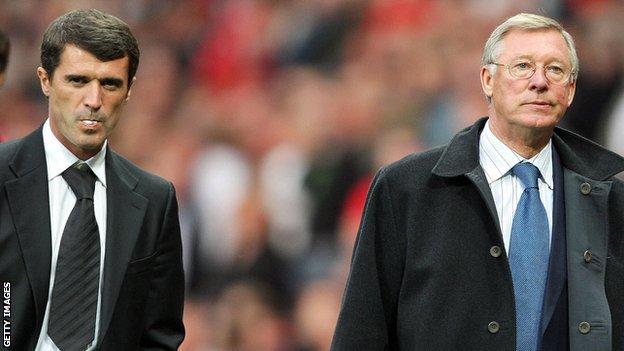 Ferguson, who retired as United manager in May after 26 years and was replaced by Everton boss David Moyes, is now a director at Old Trafford.

"Everything is about control and power [with Ferguson]," said Keane, who left United after falling out with the Scot.

"He is still striving for it now even though he's not manager - there's massive ego involved in that."

Title-holders United have endured a difficult start to the season under Moyes, sitting ninth in the Premier League table having lost three games at Old Trafford already.

Keane, now assistant manager of the Republic of Ireland, left United in 2005 following a controversial interview with in-house television channel MUTV in which he openly criticised his team-mates, and says that his relationship with his former manager is now "non-existent".

The Irishman, who won seven Premier League titles, four FA Cups and the Champions League under Ferguson between 1993 and 2005, feels his former manager has failed to show him enough respect for his on-field achievements.

Keane believes Ferguson's praise for him in his recently-released autobiography for "covering every blade of grass" in United's 1999 Champions League semi-final second leg against Juventus was disparaging.

"Stuff like that almost insults me. I get offended when people give quotes like that about me. It's like praising the postman for delivering letters," he said.

Keane was speaking in an ITV4 documentary called Keane and Vieira: The Best of Enemies which airs on Tuesday night and outlines his rivalry with former Arsenal captain Patrick Vieira.