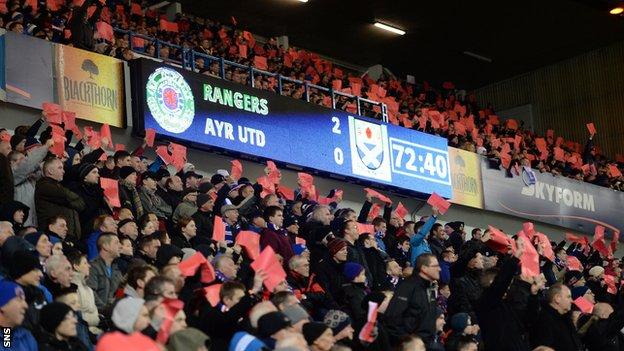 A Rangers fans group that organised a red-card protest at Ibrox is writing to the club's top 50 investors appealing for their help to force board changes.

It wants the investors controlling around 90% of Rangers shares to vote for changes at the annual meeting.

To protect their investment and for the club to flourish, the investors have to stand with the fans. It's time for change

The Sons of Struth describes itself as "a body of like minded Rangers fans who hold dear the values of" much revered former manager Bill Struth and claims to have the backing of most of the club's supporters groups.

In its statement to investors controlling around 90% of the club's shares, the Sons of Struth will ask them to "stand with the vast and overwhelming majority of the fans and demand change on the board at Ibrox".

It urges investors to "recognise the strength of feeling amongst Rangers support about the way the club is being run".

Rangers' AGM on 19 December will be the culmination of

Thousands of fans held up red cards supplied by the Sons of Struth at Ibrox on Saturday and Houston thought that the numbers who took part showed that most support those demanding board changes.

"Working with all the organised fan groups and the response we had from the fans in the stands shows without doubt that the board as currently composed does not enjoy popular support," he added.

"To protect their investment and for the club to flourish, the investors have to stand with the fans. It's time for change."