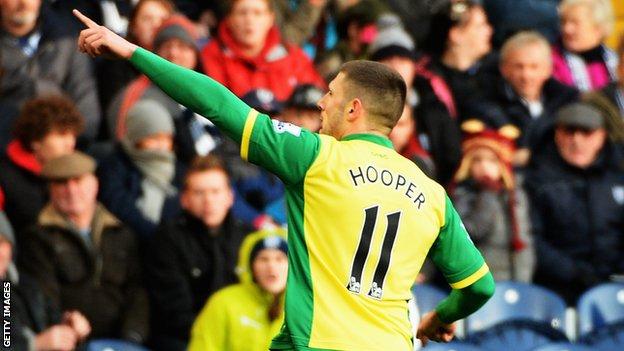 Norwich striker Gary Hooper has said he still hopes to break into the England squad for next summer's World Cup.

The 25-year-old when joining the Canaries in the summer from Celtic.

And after scoring in the forward was asked if going to Brazil was on his mind.

"Yes. Everyone wants to play for their country. I've just got to keep doing it on the pitch and keep scoring goals," he told BBC Radio Norfolk.

"Everyone's got to create chances for me. It's a team game and I've got to take my chances."

Hooper has scored three times from his last four starts for Norwich and has five for the season in all competitions.

The Essex-born frontman suffered a shin injury in pre-season and had to wait until 19 October for his first Premier League start.

After scoring the only goal in a win over Crystal Palace last week, he found himself on the bench for the 5-1 midweek defeat by Liverpool, and said it has been difficult to adjust to being in and out of the side after having a guaranteed starting place at Celtic.

"It is [hard]. But the gaffer chooses the system and the team," he said. "You have to deal with it and do the job when you get on the pitch."

Canaries boss Chris Hughton, who has been without the services of striker Ricky van Wolfswinkel since the record signing damaged a toe muscle in late October, was pleased to see Hooper continue his good form against the Baggies.

"Physically he's in good shape at the moment. It was really tough for him getting injured one week before the season and then missing a four-week period," said Hughton.

"Gary, when playing games and getting the right service, will score goals. But his contribution to the team was every bit as important."