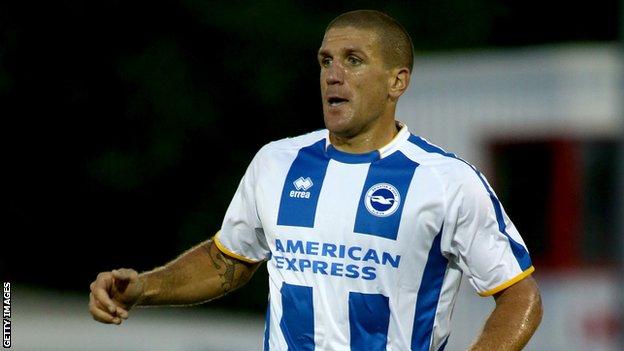 Brighton centre-back Adam El-Abd was relieved to come on as a substitute in the 3-1 win over Leicester for what was his longest run-out since August.

The 29-year-old came on as a first-half replacement after captain Gordon Greer suffered a calf injury.

El-Abd told BBC Sussex: "I'm just delighted to play a game. I have missed it so much - I am not going to lie.

"Matty [Upson] and Gordon have done so well since the back end of last season I have had to sit and wait patiently."

El-Abd signed a new two-year deal this summer but has only started one game this season - the defeat against Newport County in the League Cup.

It can happen at any time and it is not easy to get yourself right, mentally, for the scenario where you could be on at any minute

Before Saturday he had only previously featured twice in the Championship, coming on as a late replacement in the wins against Blackburn and Wigan last month.

The defender is Brighton's longest-serving player, having come through the youth ranks and made more than 330 first-team appearances since his debut in 2003.

"It is very frustrating as I want to play but I am happy for the boys as we have been doing well," the Egypt international said.

"I feel sorry for Gordon as no-one wants to see a fellow professional or team-mate injured. But that is part and parcel of it.

"It can happen at any time and it is not easy to get yourself right, mentally, for the scenario where you could be on at any minute. It is good to get a game and I am so happy to have played."

Victory over the Foxes at the Amex Stadium moved the Seagulls to three points off the play-off places, and saw them return to winning ways following their defeat against managerless and rock-bottom Barnsley in midweek.

"It was massively important we did that as Tuesday was really disappointing," El-Abd said.

"It sums this league up nicely as you can't take anything for granted. Whether you play the bottom or the top, each game is equally difficult and poses different threats.

"We'll take that on in our mindset for the season and hopefully start doing better against the lesser teams and continue to do as well as we have been against the top half.

"We have got a great dressing room and we all want success. We are a very driven group and we need to make sure we take it into Middlesbrough next week."