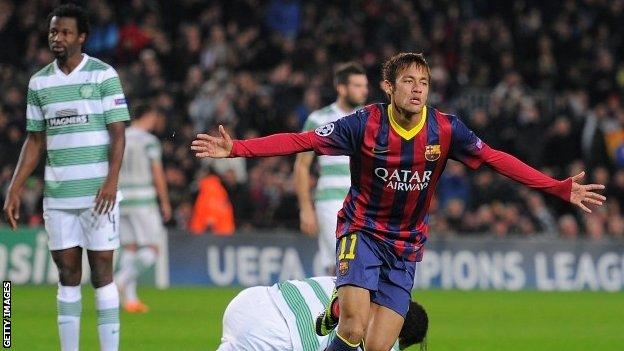 Gerard Pique opened the scoring and Barca added two more goals late in the first half through Pedro and Neymar.

Brazilian Neymar, a £49m summer signing from Santos, added two more before the hour mark to complete his hat-trick.

Neymar finding his feet at Barca

Neymar, signed from Santos for £49m in the summer, had scored only four goals in his first 18 appearances for the Catalans before tonight.

The result means Neil Lennon's side finish the Champions League group stage with their lowest-ever tally of three points.

And the margin of defeat at the Nou Camp matches the 5-0 loss to Artmedia Bratislava in what was former manager's Gordon Strachan's first match in charge in 2005.

Celtic came into the match having scored 12 and conceded none in their previous two domestic games, while Barcelona had been stung by recent losses to Ajax and Athletic Bilbao.

But this was Barca at their best, inflicting Celtic's 25th away defeat in 27 Champions League matches.

The early signs were worrying for Celtic as they twice gave up cheap possession deep in their own half - and though Barcelona failed to punish them, it was not long before the hosts did take advantage.

Alexis Sanchez drove in from the right and though his shot, which deflected off Efe Ambrose, was kept out by Fraser Forster, Pique was inside the Celtic six-yard box to poke the ball into the net.

Celtic - who had left Charlie Mulgrew and Kris Commons out of the starting line-up - regrouped and kept the Catalans at bay until just before the interval.

That was when the home team stepped up a couple of gears, with Neymar central to all that was good about Tata Martino's side.

Celtic claimed for a handball against Pique, but when that was not forthcoming, Neymar shuffled away from Ambrose before squaring the ball for Pedro, whose exquisite movement to the front post allowed him a straightforward tap-in past Forster.

Matters deteriorated further for Celtic moments later at the end of a move that involved innumerable passes. Alexis lifted the ball over the heads of the Celtic defence for Martin Montoya and his pass was swept into the net by the irresistible Neymar.

If that goal was sublime, the fourth was even more majestic. Again it was the Brazilian who finished it following a back-heeled one-two with Xavi, this time curling it past Forster from the edge of the box, and again it was the culmination of a prolonged period of possession.

Forster did manage to keep Xavi's free kick from bulging the net, but he was beaten for a fifth time as Neymar nutmegged Ambrose and claimed his hat-trick, with the beleaguered Adam Matthews unable to knock it off the line.

The brilliant Neymar could have scored another two either side of Tello's strike, which deflected off Virgil van Dijk to leave Forster wrong-footed.

Samaras, who only a year ago had put Celtic ahead in the same stadium, headed Commons' free kick past Pinto in the closing stages and had another effort cleared off the line by Pique, but the winning margin did not flatter Barcelona.