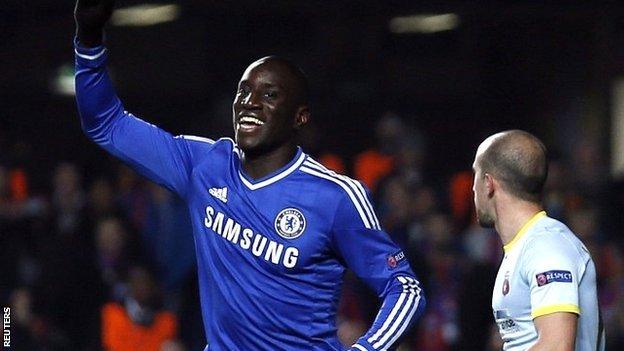 Chelsea secured top spot in Champions League Group E as Demba Ba scored the only goal in a straightforward win over Steaua Bucharest at Stamford Bridge.

The Senegal striker, 28, turned in Oscar's flick-on after the hosts dominated the opening 10 minutes.

Gabriel Iancu squandered a fine, and rare, chance to equalise for Steaua as he miscued when one-on-one soon after.

Chelsea should have increased their winning margin, with Ba and Eden Hazard guilty of particularly glaring misses.

The Blues will be paired with one of Bayer Leverkusen, Galatasaray, Olympiakos, Zenit St Petersburg or AC Milan when the draw for the last 16 is made in the Swiss city of Nyon on 16 December.

Top of the table

This is the ninth time Chelsea have won their group in the Champions League.

The last time was in 2011-12 when they topped a group ahead of Bayer Leverkusen, Valencia and Genk.

They went on to lift the trophy.

However they will need sharper form than was required against Steaua if they are to get close to replicating their 2012 success.

In the build-up to their final group game, Jose Mourinho had called on his side to be more ruthless in front of goal.

While Chelsea again created plenty of chances, particularly in the first 10 minutes, they failed to capitalise.

David Luiz and Oscar had both shot wide before Ba bundled the ball into the net at the far post after Oscar rose unchallenged to flick Willian's corner through the six-yard box.

Mourinho had also insisted that Chelsea's concession of three goals in both of their previous two matches was down to bad luck rather than poor defending.

Steaua's outstanding chance of the match, however, was at least partly self-inflicted.

John Obi Mikel gave the ball away and, with Luiz caught upfield, neither John Terry nor Frank Lampard tracked Iancu's diagonal run and were relieved to see the teenage striker scuff his shot wide as goalkeeper Mark Schwarzer advanced.

Chelsea continued to create and waste chances, with Branislav Ivanovic's header pushed over the top by Ciprian Tatarusanu before Frank Lampard volleyed wide from the edge of the box.

But they still looked vulnerable at the back when their Romanian opponents, albeit infrequently, attacked.

Patelis Kapetanos's pot-shot from 25 yards fizzed off target after he had shrugged off Terry's attention.

Willian's performance, full of penetrative passing, was one of the pluses for Chelsea in the first-half and the Brazilian's precise cross after the break deserved more than to be blazed over the top via Ba's shin.

Andre Schurrle, who had tormented Daniel Georgievski in Chelsea's 4-0 win in the reverse fixture, had an instant impact against the Steaua right-back again when he came off the bench.

After tricking his way to the byeline, the Germany international's low shot looped up invitingly for Hazard to convert, but the Belgian could not react quickly enough to keep his header on target.

With Schalke beating Basel in the group's other game, a first victory in eight attempts in England for the Romanians would have toppled Chelsea from top spot.

But in truth, that never looked likely as Mourinho's men got the job done.

Check out a gallery of the match action on the BBC Sport Facebook page.