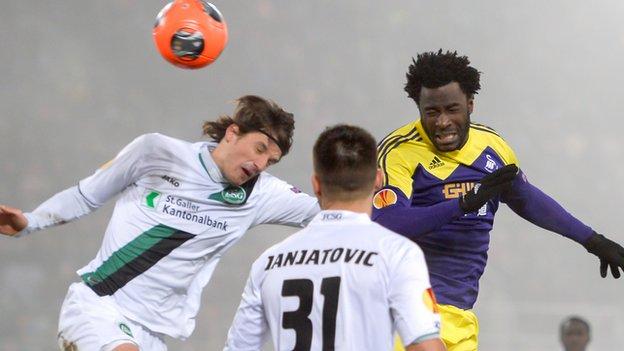 As the hosts pressed after half-time, Sebastien Wuthrich's free-kick hit the post before he had another effort ruled out for a foul on Neil Taylor.

The Swans, who had beaten St Gallen 1-0 at the Liberty Stadium in October, needed only a point to guarantee their place in the last 32.

Meanwhile, having already been eliminated as a result of losing to Russian side Kuban in their penultimate game, the Swiss side had nothing to play for other than pride.

Swansea's preparations were far from ideal as their departure to Switzerland was severely delayed on Wednesday due to fog and technical problems with their aircraft.

Manager Michael Laudrup insisted his side's heavily disrupted journey would not be used as an excuse if they failed to qualify for the last 32.

On a cold and foggy evening at the AFG Arena, Lamah - one of six changes to Swansea's side - had the first chance of note, with the Belgian international's curling left-footed effort from the edge of the penalty area going wide of the post.

The visitors showed some early attacking intent, with Shelvey forcing Herzog into a save.

While Laudrup's side were largely looking comfortable, they were guilty on more than one occasion of giving the ball away too easily.

Ermir Lenjani nearly punished them, but his shot fired into the side netting.

The fog lifted slightly for the start of the second half and the fit-again Wilfried Bony flashed a powerful header wide from Jonathan de Guzman's corner.

Swansea survived when more sloppy play allowed Roberto Rodriguez to go one-on-one with Gerhard Tremmel, who came off his line to deny the midfielder with an outstretched left leg.

The German then made another outstanding save to deny the same player after Rodriguez was put clear by Muhamed Demiri.

Laudrup's side were living dangerously and Wuthrich's free-kick clipped the outside of the post during a spell of home pressure.

St Gallen did find the back of the net but the referee deemed Wuthrich to have pushed left-back Taylor as he bundled the ball home.

There was no respite for the Swans as substitute Jose Canas cleared Mathys's free header off the line although the Swiss midfielder was not to be denied.

Swansea failed to deal with Wuthrich's cross and Mathys stabbed the ball home from six yards to give his side a deserved lead.

The Welsh side held out during an anxious 10 minutes although substitute Pablo Hernandez came close to levelling the score and settling the nerves.

The Spaniard was played in by Alejandro Pozuelo but he dragged his right-footed shot wide of the post and also had a shot saved by Herzog in stoppage time.

It was an underwhelming performance by the Swans who nonetheless secured their place in Monday's draw for the knock-out stages after rivals Kuban could only draw 1-1 in Valencia.