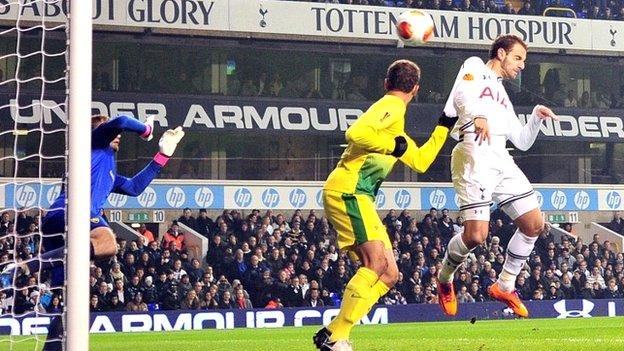 Roberto Soldado scored his first Tottenham hat-trick as Spurs maintained their 100% record in the Europa League by easing past Anzhi Makhachkala.

The hosts were already guaranteed top spot in Group K, but began with an attacking verve as Soldado headed in Gylfi Sigurdsson's free-kick before finishing well from Erik Lamela's pass.

Anzhi responded before the break when Ewerton Almeida Santos stabbed in.

Like Tottenham, the Russian visitors had already sealed progress to the last 32 prior to this game, and although they caused moments of worry for Andre Villas-Boas's team, they were eventually overpowered.

By winning the group, Spurs will play at White Hart Lane in the second leg of their Europa League knockout tie in February and they will take heart for the remainder of the competition after a confident display.

This was their fifth game unbeaten since they were thumped 6-0 by Manchester City last month.

Soldado scored his first goals from open play in front of the home supporters since his £26m move from Valencia in the summer, and was greeted with cheers as he departed 12 minutes from the end.

Anzhi might be bottom of the Russian Premier League after having to sell former stars such as Samuel Eto'o and Willian because of cost-cutting, but an energetic Tottenham certainly answered Villas-Boas's calls to make an impression before they host second-placed Liverpool in the Premier League on Sunday.

Spurs had suffered an early scare before they went ahead when Ilya Maksimov failed to test Brad Friedel when clean through, but Andros Townsend was then brought down with Soldado flicking in Sigurdsson's whipped free-kick after seven minutes.

That was Soldado's first goal since 27 October and the 28-year-old added another six minutes later, when Erik Lamela played him in with a cute pass and the Spaniard found the bottom corner.

Townsend then should have made it 3-0 but chipped wide with only the goalkeeper to beat.

Despite their fragility in defence, there were still signs Anzhi could prosper in attack and the Russian side pulled a goal back after 44 minutes when Eweton prodded home from a corner.

Townsend continued to be the hosts' most positive outlet, and he set up a third goal when he drifted in from the right, chipped to Holtby, who took one touch with his left and then flicked into the top corner with the same foot.

Villas-Boas then introduced 21-year-old Ryan Fredericks in defence, and although it was his first game this season, he wasted little time in causing havoc.

After another surging run, Fredericks was clipped in the penalty area and, after a nod from the official behind the goal-line, Swedish referee Stefan Johannesson awarded the spot-kick.

Soldado found the net from 12 yards for his seventh goal of the season, although Anzhi goalkeeper Evgeni Pomazan got a hand to it, sending the Spurs fans home in good spirits after a thoroughly entertaining game for a dead rubber.