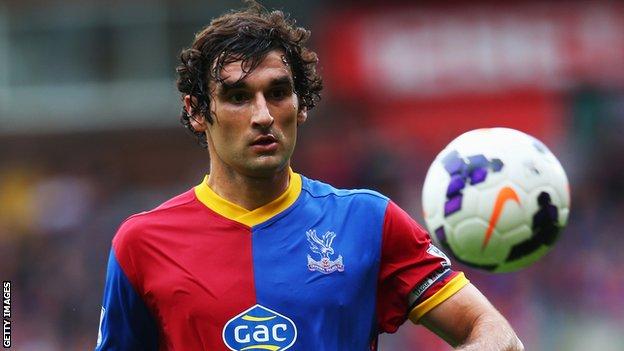 Crystal Palace captain Mile Jedinak has praised the impact of Tony Pulis since his appointment as manager last month.

The Eagles have won two of their three matches under the former Stoke boss.

"The gaffer has come in, nailed down a few things he wanted and the boys have responded really well," Jedinak told BBC London 94.9.

"It is new and we are still learning from him. As long as we keep showing that same attitude towards each other and the gaffer it is very encouraging."

Welshman Pulis saw his side beaten at Norwich in his first match in charge, but since then Palace have earned wins over West Ham and Cardiff City, and kept two clean sheets in the process.

As a footballer, especially coming up from the Championship, I've always dreamt of playing in this league. Now I am here I don't want it to stop

Those victories have put the south London side level on points with 17th-placed West Ham and within touching distance of West Brom, who sit 15th in the table.

"It was always going to be a tough week, but a very crucial one," Jedinak added.

"We didn't want to put too much pressure on ourselves and the gaffer didn't either. It's a great thing we got the results we wanted and we're looking forward to pushing ahead."

The former Genclerbirligi midfielder is determined to lead the club to survival after winning promotion through the Championship play-offs last season.

"It was great to get the contract done and I can move on now, in terms of getting us to where we want to be," he said.

"As a footballer, especially coming up from the Championship, I've always dreamt of playing in this league. Now I am here I don't want it to stop.

"If we continue on the way we are going, keep putting in performances and being consistent then I think we are heading in the right direction."