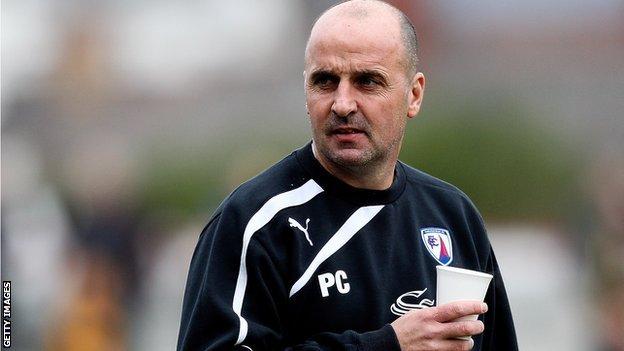 Chesterfield boss Paul Cook has said that his players must cope with the expectations of their fans.

The Spireites, who are second in League Two, were knocked out of the FA Cup by Southend on Saturday.

Cook's side are one point off top spot but have now failed to win any of their last three games in all competitions.

"The bar has been set very high at this club and the fans had got used to us winning every week and now we aren't," he told BBC Radio Sheffield.

"Teams are stopping us from playing and that comes with being a good side and we have to take it on the chin.

"If we'd won at Newport last week we would have been two points clear at the top of the table and we would still be getting criticism.

"Last year we weren't in the play-offs all season but this season we've only been out of the top three once. It's just the way football is now and it doesn't bother me.

"I think some people would have managers change every month but that is just not reality."

The 2012 winners face League One Oldham in the Johnstone's Paint Trophy Northern Area semi-final on Tuesday.

The former Accrington boss is expecting an exciting match against the in-form Latics.

"We're three games from Wembley and I think it will be a very good game," he said.

"They're bright, they play good football and they've been on a good run recently albeit they've drawn their last two."