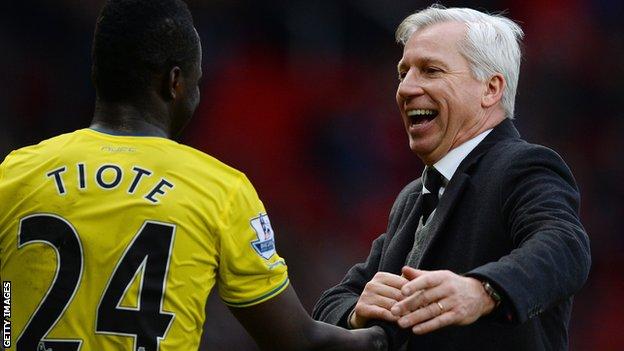 Newcastle manager Alan Pardew believes the way has shown they have enough quality to dominate possession against any side.

The Magpies had won four of their last five Premier League matches heading into Saturday's trip to Old Trafford.

In those games Pardew used a 4-4-2 formation, but against the champions he switched to a five-man midfield.

"United were shocked by our quality. I asked the lads to dominate the ball and they were good enough to," said Pardew.

Just three days earlier, Newcastle and had only 35% of possession.

In their previous seven Premier League away games this term, Newcastle averaged 44% possession. At Old Trafford, against the reigning champions, they had 53%.

Against United, Vurnon Anita started instead of Shola Ameobi, while Yohan Cabaye was moved to a more advanced midfield role.

And Frenchman Cabaye scored in the second half to end the club's 41-year wait for a league win at Old Trafford.

"I had been asking them to play a more direct, simple style of football," Pardew explained to BBC Newcastle.

"I'm incredibly proud. We switched to a more complicated game, based around possession and control, and it worked.

"The ability in the squad to do that is a very nice armoury for me to have."