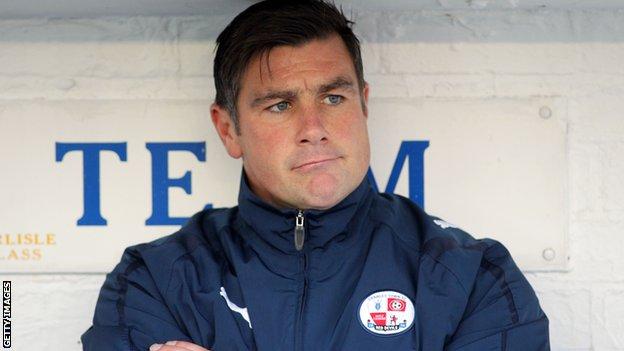 Portsmouth have appointed Richie Barker as their new manager, with Steve Coppell also arriving at the club in a director of football role.

Barker's performance in his 16 months at Bury from 2011-12 was hugely impressive, taking them up to League One and securing a mid-table finish in the third tier. His record at both Gigg Lane and then Crawley working with a tight budget is likely to have particularly impressed the seven-man Portsmouth board.

He takes over a Pompey squad that is far stronger than their league position suggests. They have already proved they are a match for anyone in the division and if they can find some consistency, a push for the play-offs in the second half of the season should not be ruled out.

Barker and Coppell filled the same roles at Crawley Town, until the former was relieved of his job two days after Whittingham's dismissal by Pompey.

"It's a fantastic club, you only have to look around to see the history and potential," Barker told BBC Sport.

"I'm extremely proud and extremely grateful and flattered to have the opportunity.

"The short-term goal is to get into the top half of League Two and eventually out of the division - in the right way. Long term who knows? There is no glass ceiling and if this place gets rolling it can keep going.

"Steve is a fantastic mentor and I have a lot of respect for him. He acknowledges I am the manager and he will not do anything to undermine that."

The 38-year-old began his managerial career at Bury in April 2011 and steered them to promotion from League Two.

Barker, who has signed a standard rolling contract with Pompey, then spent 18 months at Crawley, leading them to a 10th-place finish in League One last season before his dismissal last month.

"The fan expectation is part of the reason I came," added Barker. "The fans want to be in the top two divisions and that expectation should drive everyone on.

"I think it's realistic, it's not a burden. It'll be tough to handle but I want to fulfil those expectations."

"I'm very excited," the 58-year-old said. "Richie asked if I'd like to be involved and I jumped at the opportunity."

Barker's first game in charge of Pompey, who sit 17th in League Two, will be against Newport County at Fratton Park.

They have lost five of their last seven matches and have not won since 2 November.