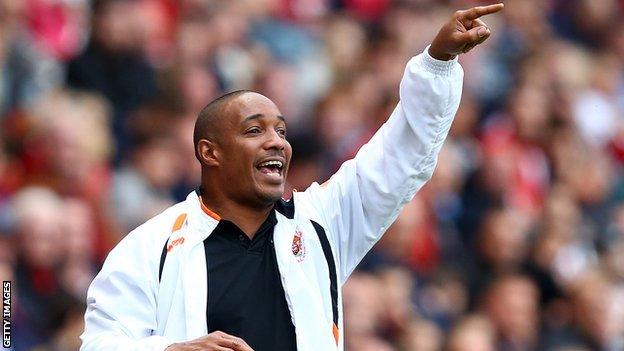 Neal Bishop and Angel Martinez were sent off in Saturday's 5-1 loss at Derby County - four days after three of Ince's men saw red against Yeovil.

"It might be frustration. [We] were up in the top six and the [players] think, 'we should be winning'," he said.

"But no, we shouldn't be winning every game because we don't have a budget and squad big enough to win every game."

The Tangerines slipped to seventh place following their latest loss, but are only behind Nottingham Forest and Reading in the play-off places on goal difference.

Former England, Manchester United, Liverpool and Inter Milan midfielder Ince feels the Championship schedule has stretched his squad to the limit a number of times already this term.

He said the three red cards at Yeovil on Tuesday night and a heavy loss at Derby in an early kick-off on Saturday, summed up his point.

"It is not a lack of professionalism, it is because they are tired," he told BBC Radio Lancashire.

"Other teams don't have fixtures away at Bournemouth and then Millwall [in September], then have to go away to Yeovil on Tuesday morning and play Saturday morning."

Ince also argued that standards of refereeing has compounded the situation, asking that the Football League consider appointing Premier League referees to Blackpool matches in future.

The Seasiders boss was handed a five-match stadium ban in October for his conduct towards a match official and admitted to three charged relating to his actions, following his side's 2-1 win at Bournemouth. He was also fined £4,000.

"We get poor officials officiating our games, we never get a Premier League referee come down and referee Blackpool, while other teams do," Ince said.

"You want a bit of help - you want people to help you by making the right decisions."

While Ince accused Chris Martin of diving to earn the penalty that led to the equaliser at Pride Park, he did admit that Bishop had no excuse for sending the striker to the spot for a second time.

Ince, however, added that Bishop did not deserve to see red for the challenge.

"He [Bishop] fouled him first before he wrapped his legs around to take the ball, but it's not a sending off," Ince said.

"If it's a pen, then yeah, it's a pen and I'll have to admit that. But to send him off is rubbish, absolute rubbish.

"I've seen the penalty situation for the first one and it's an absolute joke - there is no contact.

"If there is any contact [between Martin and Jack Robinson] it was outside the edge of the box and he took two steps and fell inside the box."